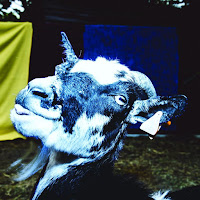 What kind of band does Barely Autumn want to be? That was the main question in my head after listening to Day Trip To The Petting Zoo for several times.

As listened I had. This album is a joy to listen to, as it contains some exquisite pop songs, several alternative rockers and a few nice, small electronic songs. But so different.

In other words Barely Autumn takes its listeners and your reviewer on a musical trip showing the most beautiful parts in its landscape and city environment.

Barely Autumn is a band from Belgium, Brussels to be exact, around songwriter and singer Nico Kennes. After releasing its first album in 2017, called 'Barely Autumn', the band played in Belgium, The Netherlands and Germany. Early in 2020 it is time for a new record and it is one I fancy totally.

Day Trip To The Petting Zoo is all but for the little children associated with these trips, but for everyone above that age. Kennes and band are not afraid to show a broad range of influences in their music. The slow 'Dream Vaporizer' with its electronic drums and echo reminds me of a Donna Blue light and dark, where 60s girl pop meets electronica and heavy guitars. 'Abortion Coffee', rocks out straight away, to make a point after the apparent softness of 'Dream Vaporizer'.

The album starts with the first single of the album, the rocking popsong 'Alix'. If anything it is the ideal opening song for this album. 'Alix' has a dreamy quality that keeps returning throughout. The kind of song that soothes and pleases at the same time. The surprise kicks in straight away, as 'Crucified' is one of the electronic, softer songs. The kind of song that put me on the wrong foot immediately. The reason while it took me some time before I was able to grasp the album as a whole.

Another dark song is 'Tinder', the deep sounds are adorned by the voice of Bárbara Sarmentero Carnevali, for who the melody almost goes too deep. The effect of having her voice on the album, is another moment of small wonder.

Being from Belgium perhaps makes it inevitable to sound a little like dEUS, the band having started the attention the world gives Belgium releases ever since (and seldom before). Having said that, I like every single song on Day Trip To The Petting Zoo better than everything before and after 'The Ideal Crash'. Barely Autumn is able to build in a pop element into its alternative music. Serious pop for sure, but its songs contain melodies that are simply memorable. And fun, let's not forget that important element. From every single angle the band approaches its songs, they work. The switch between digital and analogue instruments may surprise at first, as a whole it produces an organic album. Understanding where I came from at first with Day Trip To The Petting Zoo that may be the biggest surprise of all. Played under the right circumstances, I'd say I have found my new Tim Christensen.

So, yes, this album is an adventure. Go and take your own with Barely Autumn now. And that question at the top? The answer is as simple as hard to achieve: an extremely good one.

You can listen to and buy Day Trip To The Petting Zoo here: