When I Have Fears. The Murder Capital 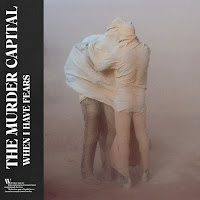 Shame, this band's name has fallen on this blog before this week. The Dublin, Ireland band The Murder Capital has been associated with Shame and with a band that isn't around any more for almost 40 years, Joy Division. So what of it?

'For Everything' has a few similarities with 'Family Dinner', the song that opens Sons' debut album, discussed here yesterday. I will let you figure them out for yourself. An important one is the energy captured on record. The main difference is the Britishness of the way the rock is filled in by The Murder Capital and the talk-shouting way of singing by James McGovern.

A whole host of post-punk bands from the U.K. and Ireland come by in the music of The Murder Capital. The Edge's guitar playing without the tons of delay on it is clear one, but also the way XTC made its accents in music can be heard. And so many others, so, yes, When I Have Fears is not an album distinguishing itself in originality. The band leans on what it knows from the record collection of parents. So what? It is all about what happens next and believe me, it does.

That next is well taken care of. Moving into When I Have Fears it becomes very clear The Murder Capital builds an atmosphere on the album that makes it very hard to put down. With the world slowly moving into disorder, tensions, cold war and recession, the doom sound the band creates with all these late 70s and early 80s influences may be the right doom sound at the right time. At least for my generation. The late 10s and early 20s I know are definitely listening to something else these days. Rap, hiphop and dance is da bomb there or whatever they call it. Besides gaming and social media that is of course.

With its sound and the way of singing of James McGovern The Murder Capital also moves into editors territory somewhat, to mention a more modern band. The main difference is that the Irish band wins out in originality, mainly by leaving behind the screen of bombast to hide behind. A song like 'Slowdance II' is naked compared to anything by editors. The difference between looking through a window and looking at a concrete wall. That makes it so much easier for me to meander along into how the band slowly builds up 'Slowdance II', making the song more interesting than any single song by the U.K. stadium rockers. (Okay, the cello ending was not necessary.)

This band is not afraid to show its music in all its imperfectness and nakedness. It trusts the melodies it made and on the presence it creates. Just listen to how after the explosion of 'Slowdance II' 'On Trusted Ground' remains little for a long time until soundscapes on electric guitar joins the sole guitar (perhaps even a bass). The song takes nothing more to convince.

At the same time the same song shows some naivety that is excusable on a first, and even second album. It shows the sincerity of The Murder Capital as well. A band that is not about compromises. My impression is that what I hear is all I'm intended to get and not what others than the band wanted me to hear. What I hear are emotions from a band of five young men. Emotions that easily reach me despite our difference in age. Perhaps even more so than their influences did when they and I had the age of The Murder Capital's members now. How can I tell?, you may ask. Just listen to the album. Settle into it and be surprised about the daring way the band expresses itself. You will be surprised as this band is all but one dimensional in its presentation and playing.

The Murder Capital? A band to watch.