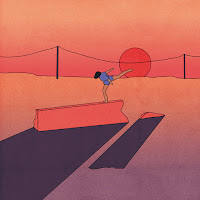 A girl dreaming of a gymnastics career in an impossible place, possibly a desert? It is possible to derive at this conclusion looking at the artwork of Anak Ko. Whatever the answer, the word dream is appropriate where Anak Ko is concerned.

Jay Som is Los Angeles based Melina Duterte, a young woman with Philippine roots releasing her music since 2013. With a family name coinciding with that country's president no less. She has released two albums before Anak Ko, the latter being the first with a band around her.

On Anak Ko Jay Som let's her pop side shine out regularly. The songs simply please the ears, but mind, there is a decidedly more challenging side woven in here and there that allows the listener to remain alert and notice the many fine details.

Jay Som is not afraid to show a sugary side that would not have scared Linsey de Paul in her 1972 number 1 hit, 'Sugar Me'. Were it not that Jay Som has an alternative rock side that she loves to show. The combination is what makes Anak Ko extremely interesting to listen to.

In many of her songs Jay Som is influenced by dreampop. Her voice, soft, devoid of urgency, seems made to float over her music. It is mixed right over the music to make sure it does not drown when it flares up. She could just as easily be a sigh girl from the French yé-yé period or Charlotte Gainsbourg in this century. In that sense Jay Som lays a connection between music from decades ago and current artists like Courtney Barnett, where she has left the punky alternativeness behind her for most of the time and exchanged it for delicateness. At times the music is so vulnerable it seems it could break.

That changes by playing the album louder in the living room. The richness of the details in the production come alive immediately in that situation. Beneath the seemingly calmness a lot is going on. From dreamy playing to little funky guitar bits, it is all there, while Jay Som remains her calm, tranquil self.

Yes, the album is not suitable to play under all circumstances. Simply because I am not always in the mood for music like this. The moments I am though, I'm content nearly instantly and that is not a condition any record puts me into.

You can listen to and buy Anak Ko here: