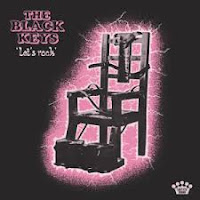 The message is clear: The Black Keys are back and fully charged. The artwork leaves little doubt about the band's intentions. But what will the music tell me?

With the 'El Camino' album The Black Keys broke big with at least two songs that still can be heard on radio stations across the globe on a regular basis, 'Lonely Boy' and 'Gold On The Ceiling'. Follow up album 'Turn Blue' certainly had its moments but got nowhere close to its predecessor. A silence for years on end, until just before the summer of 2019, followed, where both members went their own way.

So Let's Rock is here and I am listening to it again. The album in general met favourable reviews of the inspirational but nothing new kind. This is the correct description as far as I'm concerned, I am not going to counter that in any way. So what it comes down to, is the quality of the songs on Let's Rock. There's nothing wrong with repeating what you are good at as long as a band produces a 'Tattoo You' and not a 'Dirty Work'. Whoever reads this can be rest assured, this is a 'Tattoo You'. Let's Rock is a varied album with some nice rockers, mid-tempo inspired rock songs and a few more laidback tracks that all have their moments of pleasure and even brilliance.

Dan Auerbach's guitar solos rip songs apart in all the right places. Always supported by the fierce rhythm playing of Patrick Carney. All in all Let's Rock is more of a duo record than the two previous records. Of course there are loads of guitar overdubs. To play it all live Auerbach needs at least three other guitarists on stage with him. Next to that there are loads of gorgeous female backing vocals, lending Let's Rock a fine soul aura that mixes into the (bluesy) alternative rock of The Black Keys.

What amazes me most on this album is something that can be read in a wrong way completely but is far from intended to do so. Many songs on Let's Rock after the first three start in a way that make me think: again such a soft, bit duff song? Each and every single song comes alive and makes me forget my first impression immediately. I can't remember ever having that experience before in such a stark yet varied way. Usually a song starts out in the wrong way and remains there. Not the songs on Let's Rock. In the end they all rock and become special. Something they are not on Auerbach's solo albums. So it must be the magic that Patrick Carney brings to The Black Keys that makes the difference. Either that or Auerbach keeps his best songs for the band.

Whatever the reason, Let's Rock is a fine album putting The Black Keys right back on track. Inspiration hit and fully charged the band indeed. The album's title totally justified.


You can listen to our Spotify Playlist to find out what we are writing about: