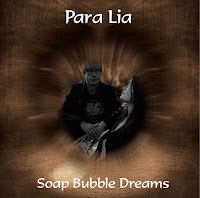 Para Lia debuted on these pages in the spring of this year with its EP 'Hawk Hill'. It was only then that I found out that an album had been released earlier in the year and yes, 'Hawk Hill' and its two companions on the EP had wetted my appetite.

Soap Bubble Dreams starts out with a slightly dissonant chord that sets the stage for the album. We're in for rock and Para Lia delivers the whole of the way. Beautiful guitar solos in the best (prog)rock tradition in combination with a golden melody or two come by like there's no tomorrow.

Para Lia is a duo from Cottbus, a German town fairly close to the Polish border south east of Berlin. René and Cindy Methner make up the band. They have listened to rock music of the past 50 years and went to work to come up with its own blend of these influences.

The guitar is René Methner's instrument of choice. You can hear his love of playing this instrument all over the album. Para Lia does not stop there. It is obvious that a song is not a song before other instruments get equal important parts to play. There's a firm drum under each song. Pounding away, laying a concrete foundation allowing all other instruments to bounce off of. The bass is right in sync here, coming forward in a song like 'Leave Of Grey'. The second instrument drawing attention is the Mellotron (sound?) that permeates the songs. That hippy, wavy sound gives the rock songs a psychedelic edge, without ever tripping away. For that Para Lia is far too direct. Where possible other instruments can be noted as small embellishments. There is one constant factor though: every instrument is played by René Methner.

René is also the singer of the band. Cindy adorns the songs with her backing vocals. Often giving the songs a fairytale rock tint. Where in a band like Within Temptation the female voice is leading, here it is more in the background but with the same effect. She lends a dreamy quality to the rock of Para Lia, providing the music an extra and interesting layer.

Had Soap Bubble Dreams just been an album with one dimensional rock, it would have been a lot less attractive to me. It is the mix of the use of dynamics, like in 'Over It', that was included on 'Hawk Hill' EP, the dreamy female vocals and keyboards, in combination with good to strong melodies that make Soap Bubble Dreams an album to truly enjoy.

The only thing I can have against the album, is that 'Hawk Hill' is not on it. This is a conscious decision so I understand, to have a great single after the album, but it is missed here. At this point of writing the guitar and Mellotron intro of 'Beautiful Delay' starts and who am I to complain at that point? With a song like that on an album, not much can go wrong. The bass and drums crank up the pace, the dreamy Mellotron does the rest and than Cindy Methner gets a solo spot as well. 'Beautiful Delay', folks, I do not need to write more.