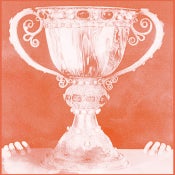 Listening to Korfbal's record Special Agent for the first time something dawns on me. Here's a new Dutch band releasing its first record - o.k., all members play in other bands, but most are almost as new as Korfbal; and here I am, hearing clear influences from a record that was released in 2001. There was a lot to do about it at the time. Fact is, I was a grown up for quite some years when it was released. The Velvet Underground was the band continuously referred to at the time. And now I'm allowed to listen to a new generation finding inspiration in 'Is This It?' by The Strokes. Unfortunately for The Strokes that all but was it. What Korfbal shows by way of Special Agent and with ease I'd like to add, that a lot more happens under the sun. Through that all the band creates this world of dirty, musical happiness with the building blocks handed by past bands and the inventiveness of its members to create something fresh and new.

Special Agent starts in a way that had me turned off had the band continued in this artificial, experimental and unstructured way. It didn't and shows the strength of the songwriting skills the band contains within it. A song is a song, also when playing in a more alternative rock, sometimes slacker, ramshackle sort of way. Korfbal has the songs, the bite and the edge.

Korfbal is a band that played a lot a few years ago but never got around to making that first album. All members went their respective way and bands. Come 2019 and the time seemed ripe to record it anyway. As I wrote, the first (real) song 'Quasimodo' has that The Strokes, thus The Velvet Underground influence. It is a great and exciting opening song for Special Agent. If you're into alternative rock with a nice edge 'Quasimodo' ought to be your kind of song. Korfbal plays with the format of the song in interesting ways, throwing some odd balls to the listener as well.

From there on Korfbal takes the listener on an adventure. The supertight 'Achilles' Heel' remains in The Strokes territory, but soon other avenues and by ways of rock are entered making Special Agent the interesting album for it. I like 'Achilles' Heel' a lot though. The urgency of the song speaks volumes, while the lead guitar presents a huge spark, making the song stand out easily. A song like that immediately puts Korfbal on a level of the first Canshaker Pi album. A compliment as far as I'm concerned.

Moving through the album, it becomes clear to me that with Korfbal this country once again produced an alternative rocking band that is able to get along with the best. And what I like is that Korfbal is not a follower in the sense like some British bands that get rave reviews of late are. At least for some of them, their music and influence seems much more one-dimensional, British (post)punk. Korfbal melts together U.S. and U.K. alternative rock and meets some Dutch classics as well. The result is a sprightly album, that is open, breaths at the right moments and can explode without having to overdo and/or overshout everything. Yes, for delicate ears this is a loud album, but in that loudness Korfball places moments of rest. It is at rest, content with its songs and it shows. There's no need to go over the top. The album already hit that level.

Within three songs Korfbal is beyond that initial starting point, The Strokes and moves beyond that band in a way The Strokes never managed to do. The result is a strong album that it can go out into the world with and enjoy the critical and personal acclaim it deserves.

You can buy Special Agent here: