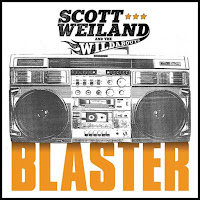 A record that remained on the stack for too long. I never really was a fan of Scott Weiland's first band, Stone Temple Pilots, simply to top heavy. A rendition of second generation grunge that took itself too seriously. Velvet Revolver never was as good as it could have been. With the Wildabouts Scott Weiland just rocks out. The rock riffs splash from the record. Although some of the vocal melodies are extremely recognisable, the lighter tone of the music makes them totally alright.

At the same time Blaster holds enough variation to make the album super listenable. Some classic rock and roll elements get woven into 'Beat It' riffing. The king meets the king of pop in 'Way She Moves'. Why not. There's a first time for everything.

Blaster de facto is Scott Weiland's fourth solo album that is also credited to the Wildabouts. Together the band cooks up a storm here and there. Weiland also plays guitar and keyboards, Tommy Black plays bass, Danny Thompson is the drummer (although Mike Avenaim plays drums on 4 songs), Jeremy Brown plays the other guitars. Former Smashing Pumpkins guitarist James Iha plays guitar on 'Blue Eyes'. Come to think of it, is there a grunge band left, if we forget about Pearl Jam?

Isn't there anything more concrete to write about Blaster, you may start asking yourself dear reader? A good question. I find that the answer is sort of no. The reason simply being that Blaster blasts along in a quite pleasant rocking way. Not that everything is so straight forward, several songs rock hard and have some nice sidetracking moments that make them very interesting to listen to. There is a Bowie moment in 'Youth Quake' with "Hold on" for example. There are these little moments in the bigger picture that make Blaster more than an average album. There is just not that much more that need to be written about. Good is good enough here.

Scott Weiland & the Wildabouts have made a great rock record. It's that simple when all is added and subtracted.

You can listen to 'White Lightning' here: