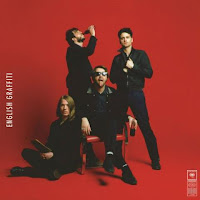 The Vaccines took the rock heavens by storm with its first single 'Wrecking Bar (Ra Ra Ra)'. All 1.20 minute something was one balled shot of energy. 20 years balled into a little over a minute. This was followed by a decent debut album, followed by an even more decent second one in little over a year (Read our review here: http://wonomagazine.blogspot.nl/2012/10/come-of-age-vaselines.html). And then a long silence followed. In 2015 there finally is a follow up. It took me a while to get used to this third album, but we turned out alright I can say after many a listen over a longer period.

Don't expect another 'Wrecking Bar'. Most likely The Vaccines will never make a song like that again. So what is it making in 2015? It does something like 'Wrecking Bar' in 'Handsome'. The band tries to tap into that energy source once again. The Undertones meets The Vaccines. It works as 'Handsome' is a great song. The sneery voice of Justin Hayward-Young sets the right tone for the punky rock of the band in 'Handsome'. The opening song sets the listener on the wrong foot a bit. The Vaccines have moved beyond the punkrock/garage rock of old. 'Dream Lover' is more representative of the regions where they moved to. Almost a ballad, were it not for the distorted eruption on the guitars. Hayward-Young has more than one flavour in his voice and is using it here. 'Dream Lover' is one of the pearls on English Graffiti.

In short English Graffiti sees The Vaccines moving away from the music it used to make. Gone is the excitement and exhilaration of its first heyday. What happens is something that The Strokes went through after its first album and what made me mostly turn away from the band ever after. This is not happening to The Vaccines though. A song like '20-20' keeps me watching the band closely. It has all the energy needed to keep my attention focused on the album. The Vaccines seem to be in need of serious recognition. '(All Afternoon) In Love' is a very different song. Paul Weller comes very much to mind here. Our Justin has fallen in love and is floating away on a load of pink clouds.

The head remains in the clouds with the almost psychedelic 'Denial'. The music just floats and the voices shoot up to greater heights. The difference with 'Handsome' is so huge, it's almost as if this is not only a different singer, it's a different band. And then The Vaccines leave themselves totally and turn into the new Blur in 'Want U So Bad'. The problem is the band does it extremely well, so that I can't possibly object. Especially not when these estranging elements get mixed in ways that make the song even exciting. An extremely weird hybrid of a song 'Want U So Bad' is. Freddy Cowan just orbits for a few seconds only, before he's caught back in the strict net that is woven around The Vaccines in this song. Restraint, restraint, release, immediate restraint.

The whole band is released in 'Radio Bikini' and The Vaccines of old sticks up its ugly head. Spotty, punky, loud. It's all still hiding in there somewhere.

The Vaccines is on a road to somewhere. It may not really know its destination yet, but if the signs don't lie, it is going to be interesting to follow this road with them. English Graffiti may hold a dip or two it has several highs and not just when the band returns to its (former) self. Trial and error may be on display here. Everyone ought to be allowed this process and certainly people showing their creativity in public. I for one am interested to learn where we're going to with The Vaccines. As long as that journey brings songs like 'Maybe I Could Hold You' and 'Handsome', I'm not complaining.

You can listen to 'Dream Lover' here: