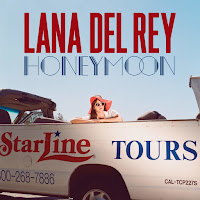 Last year Lana del Rey surprised me with her fantastic second album, 'Ultraviolence' (read more here: http://wonomagazine.blogspot.nl/2014/09/ultraviolence-lana-del-rey.html). A little over a year from my review there is a new album already. Totally out of line with the one album every three years limit most highlining artists adhere to. 'Ultraviolence' made my top 10 of 2014. Where does that put Honeymoon?

In a way Honeymoon takes me back to my very early youth when my mother used to play albums that she brought from Canada on this small record player she had. The likes of  Frankie Laine, Pat Boone, Debbie Reynolds, Doris Day. At the same time of course Lana del Rey's music could never have been made in the 50s. The title song has those violins, those soft candy layered sounds that flow from the speakers. The other distinct feature of the song is its total bareness, leaving Lana del Rey totally vulnerable. She dares to expose herself in this song, not unlike a band like The xx does with minimal beats underneath the vocals. Even when the piano joins and some vague rhythmic sounds, it doesn't change the singer's position. The dark voice 'dreaming away her life', is cool and aloof, but also totally seductive. This strange mix is fully representative for Lana del Rey's singing.

For 'Ultraviolence' Lana del Rey worked with The Black Keys' frontman Dan Auerbach, which gave her a ton of credibility and guitars. Honeymoon she co-produced with Ron Nowels and Kieron Menzies, which brought her back to the sound of her breakthrough, second album 'Born To Die'. This is far from a punishment. If anything it shows how much Lana del Rey is original. She has a clear view on who she is and what her music stands for. It may sound full of nostalgia for times gone by. For music that is not of today but of times long gone by, but is 2015 all the way..

Yesterday I heard a song from 'Kind of Blue' for the first time. A song like 'Terrence Loves You', including the "Ground Control to Major Tom" quote, is definitely acquainted to that blue, blue Miles Davis instrumental. Lana del Rey has that late night bar quality over her. The patron saint of all barflies, Saint Lana. Singing to them "Let there be light", just before they disappear into the dark, cold night, having to get up soon, far from sober, for another day. It is so easy to imagine her standing on that late night stage, with just a few jazz musicians backing her up.

Playing Honeymoon once again, I have to start admitting that Lana del Rey is an original talent. I hadn't realised that at the time because of all the clamour and hyping a couple of years ago and the speed with which these hypers dropped her again, hard. The third album in, for me, it's easy to admit that I'm a fan. Something special is happening here. Whether she is nihilistic because she only wants to "get high at the beach" or dreams of better times, Lana del Rey sounds sincere in her aloofness to the world and in her dreams. She knows how to create a mood that sucks you in, that gets you involved despite the coolness.

The songs themselves all are in a slow tempo. Some sound old, others have modern dance rhythms of the slowest variety, where they mix with the oldness and stillness. Above all the songs are all a support for the dark, seductive voice of Lana del Rey. It carries the whole album. There are no solos, no inventive guitar or keyboard parts. All instruments are like bold strokes on a canvas of a Cobra painter, but not half as wild. The music and voice are all in control. Total control, total constraint, building a tension that is near unbearable at times. When does this woman let go? At the beach probably. Not in her songs.

The album contains a poem by T.S. Elliot and a cover of 'Don't Let Me Be Misunderstood'. By Nina Simone, I just learned. The oldest version I know is by The Animals and then that flamengo-disco version of Santa Esmeralda of course.

If there is a critique to Honeymoon, it is that it is very uniform overlooking all the 14 songs. So be it. Honeymoon is not hard to sit out in one go. Far from I have to add. Like the French "zuchtmeisjes" of old, the voice of Lana del Rey keeps intriguing on this album.

If anything Honeymoon shows that an artist can come up with two good and solid albums without adhering to the two to three year time span. The only way an artist can have a true career. Lana del Rey shows just that with this beautiful album. She's here to stay and may surprise us some more in the future with a great, unexpected move or two.

You can listen to 'High on the Beach' here: