The Soft Parade. The Doors 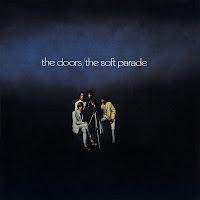 This blog returns to the series of albums from 1968-69, that Wo. started over a year ago. This time he is cheating again, as this is an album that is in his possession for 30 years or more. Albums that came before are by the likes of Spooky Tooth, Tee Set, Donovan and Barry Ryan and many more. For now The Soft Parade as 'Touch Me' was the first song that entered the Veronica Top 40 chart he was aware of.

The Doors have three truly great albums, in my opinion. The first two and 'L.A. Woman', the final album with Jim Morrison. The three middle albums of which The Soft Parade is the middle one, are somewhat harder to like. In my opinion that is.

Now in 2015 the iconic power of Jim Morrison has waned. Especially around 'The Doors', the Oliver Stone movie of 1991, the Morrison cult was at its height. The music of The Doors was everywhere again. 'Light My Fire', again, was a small hit in NL. The movie, with Val Kilmer as Jim Morrison with and without his demons, a success. In 2015 The Doors are a band of the past, that is talked about with respect, but slowly fading.

The Soft Parade is a strange duck in the The Doors oeuvre. The band experiments with horns and a lot of singing. From the band's perspective something strange is going on as well. The songs are not signed "The Doors", but to the individuals in the band, responsible for the song. Jim Morrison allegedly did not think Robbie Krieger's songs good enough and did not want to endorse them with his name under the songs. So the singer thinks the band is not up to par. Time to form an opinion myself.

'Tell All the People' is the first song. Very soulful with the blaring horns. The intro is completely un-The Doors like. The way Jim Morrison is singing, is different. The stereo mix is hindering, very primitive 1960s. No matter how full the song is in sound, it is empty listening on the headset. Setting that aside, the song is great. It could have been sung by Andy Williams even. It has an all American songbook quality, and that is not the quality of Morrison. He's coming up short here. And still I like it. It has a quality that makes it irresistible. The grand piano sound is one of these features, the arrangement the other and finally there's the vocal melody that really does me in.

'Touch Me' is the hitsingle and the first The Doors song I got to know, as far as I can recollect, although 'Light My Fire', may have been played on the radio before of course or perhaps 'Hello, I Love You', come to think of it. Anyway, I distinctly remember liking the song. It has an exciting intro, that builds up tension with Morrison delivering just that. For the rest the song goes all out with horns, strings and a harpsichord. Listening in 2015, 'Touch Me' has very little of the classic The Doors sound. The organ of Ray Manzarek is tucked away in a corner and the rest is a full out orchestra of sorts. At the same time the song truly works in my opinion. The long sax solo at the end is again very un-Doors like, while befitting the song. It gives it a mystical quality and then that firm ending.

'Shaman's Blues', is the jazzy, bluesy third track. The classic Doors sound returns here in all its glory. Robbie Krieger, plays a distorted guitar on one end, Ray Manzarek's organ in the other. John Densmore drums in the middle with one voice in front of him. Manzarek's bass peddles are in the middle as well. As such 'Shaman's Blues' is a straightforward song. A song this band excels in. Yes, there are better ones of this kind, but certainly worse. There is still a melody and a looseness that several The Doors songs just do not have. Too uniform, too simple, too little chords. Not this one. The two musicians really play their instruments, creating what a good The Doors song should sound like.

After 'Shaman's Blues' we move into the section of the album where my interest always started to wane. So I pay extra attention this time around. 'Do It' rocks out and has a nice mellow middle section. Nothing wrong with it, although there are a few section that the band does not seem to know which way to go.

The upbeat of 'Easy Ride' hits me like a surprise does. I have not a single recollection of this song at all. Like I never heard it before. It is almost as if The Doors are having fun here. It is a song that sounds like The Doors, but is so different from what they usually play, that it could have been another band behind Jim Morrison. 'Easy Ride' is a ton of joy in the The Doors repertoire. By now that elaborate arrangements have left The Soft Parade. This is just the band playing and nothing else. An overdub perhaps, but minimal. How is it possible that I never noticed this song? All that went on before is o.k. too, so???

'Wild Child' is one of the type of The Doors songs I'm less a fan of. The staccato riff with not a lot of fantasy laid into the vocal melody as well. What saves 'Wild Child' are the interludes between the verses. Krieger's slide guitar is a joy to listen to as it often is. Morrison slides into his shaman role, doing the thing his voice is suited for, although he has to strain himself almost the whole time. I doubt whether he would still have been singing if alive.

In 'Running blue' the horns return. It is a strange hybrid of a song, with the country, mountain hop bits and pieces, some free jazz horn blowing, pre-Steely Dan in some places. This Otis and Dylan homage is plain weird, but fun in a psychedelic, trippy way. Everything is possible in 'Running Blue'.

'Wishful Sinful', is one of my favourite The Doors ballads. The string work like they do in a Boudewijn de Groot song like 'Prikkebeen'. For the rest it is more extras than band. A lot is going on that has nothing to do with The Doors. And there's no way of denying that I think it is beautiful. If asked on what album does 'Wishful Sinful' come?, I could not have answered. It just was not associated with this one, but with that c60 tape from 1975-1976 on which it featured: The Doors story. A one hour radio show with all that fine highlights I cherished for years on end. Until I had the money to buy the albums one by one.

"When I was back there in seminary school", shouts Morrison before we go into one of those lengthy The Doors song, 'The Soft Parade'. The funky, soulful start is monotonous, but works. Something is built up slowly. The waltzy, musical piece is total weirdness. And enter 'The best part of the trip". The melody that is also the centre piece of Sweet Smoke's album 'Just a Poke'. When The Doors move off to other spheres and bring us in a trance with the repetitiousness of 'The Soft Parade'. Relaxed, the organ funky and the guitar totally in control. A groove that makes this band so good. "Proud to be part of this number"? I reckon!

So, where am I in 2015 with The Soft Parade? Having listened to the album for the first time in years, I have to state that I have underestimated the quality of this album totally. It's not a five star album, but 4? Easily. The Soft Parade is simply an extremely good album.

You can listen to 'The Soft Parade' here: