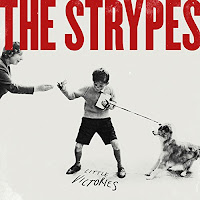 In 2013 the debut album of The Strypes, 'Snapshot', made my top 10 of the year on this blog. The album sounded like a couple of young guys just out of the garage of one of their dads and into the studio and out came this mix of very much likeable punky rock kind of Britpop songs that just didn't let go once I had heard them.

Little Victories is the same band a little bit further down the line. Some extensive touring and listening to Arctic Monkeys, Oasis and whatever garage rock band happened to cross its way.

The Irish foursome from Cavan, still only reaching their 20s, sound like they have been around for some time. Little Victories is the result of youthful exuberance in combination with the wisdom of the road. My first impression is that the band did not take the easy way out, but went straight for growth in all ways possible. The quality of the melodies show that this band knows exactly how to combine its punky rock style with a melody. Not just in the singing, but also in the guitars, including the bass here and there. The driving force of the drums does the rest.

On Little Victories The Strypes take the Arctic Monkeys road here and there. Ross Farrelly has the same kind of voice, but also that same knack to play with the metric of the lyrics. Stuffing a lot in there at times and make the end of the melody just in time. Something that, of course Dylan, but their contemporary Jake Bugg, excels in as well. In 'Eighty-Four' it goes one step further. The riffing is classic Arctic Monkeys in 2005-2007. That's just fine as Arctic Monkeys is miles further in its development. How good is 'Eighty-Four'? That is the question.

I can be short there. Good. When The Strypes put something more of itself in a song, like the next song on the record, 'Queen of the Half Crown', things become even better. This garage type rocker is a great song, in which the band not only rocks out loudly, it plays with dynamics in a great way as well. A dirty, punky rocker with balls and quality.

The Strypes is not afraid of taking the tempo and volume down. In '(I Wanna Be Your) Everyday' the band presents its form of a ballad and manages to get some emotions across. I.e., the guitars are allowed to let it rip in the solos. From Craig Chaquico to Billie Joe Armstrong. All styles come by in the sonic storm that started as a ballad. The strings under the guitar eruptions are all what reminds us of the ballad of old.

To all appearances The Strypes have made the right steps with its second album. Quality is matched with urgency and melody. Little Victories is an album that matters in 2015. It rocks, it rolls, it has it. Little victories can amount into a major one. By a landslide, says

You can listen to 'Get Into It' here: