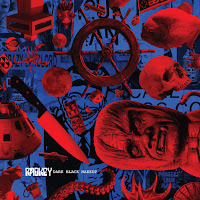 Dark makeup can make eyes shine out in beautiful way. Just look at Amy Winehouse e.g. Dark Black Makeup is an album that kicks off with a chord progression that I thought, oh but that's ... and then a different chord and then this mix of Arctic Monkeys and Franz Ferdinand bursts out singing and playing and I find myself enjoying myself, a big smile on my face. The title song bounces the listener right through the musical history of thttps://www.blogger.com/blogger.g?blogID=6022018216922190253#editor/target=post;postID=8787304880567246268;onPublishedMenu=posts;onClosedMenu=posts;postNum=3;src=linkhe past 10 years (and a lot that went before of course). Can Radkey keep this level of fun up? Let's take a look.

But not before really looking and commenting that Dark Black Makeup has quite an attractive sleeve. Semi-horror in semi-shiny yet gloomy colours. An intriguing mix. More or less like the music is.

Radkey is the brothers Darion 'Dee' (guitar/voice), Isiah (bass) and Solomon (drums) Radke originally from St. Joseph, Missouri and now from Kansas City. Young men in their early 20s and late 10s. Punk and rock is what they do and they do it well. They're playing together for five years and have a successful tour under their belt in the U.K., two E.P.s to their name and now Dark Black Makeup.

The music has this mix where the darkness of Queens of the Stone Age can come to the surface in the dark, staccato, muted rhythm guitar while after just a few moments this darkness can be washed away by rays of light in an Arctic Monkeys solo or a Weezer like melody. Radkey holds all this and more within it. This makes Dark Black Makeup an album that is far from original, which is made up abundantly by an enthusiasm that is quite inviting. Like the "hey hey now" and screaming in 'Romance Dawn'.

Dark Black Makeup was produced by Ross Orton, who worked with Arctic Monkeys ('AM'), The Fall and Jarvis Cocker. So it might be easy to conclude that here's where that one reference comes from, but it will have been in Radkey's toolbox before that.This band has made a combination of recent U.K. rock and the post-grunge rock of bands like Weezer and Fountains of Wayne combined with the oomph of Bad Religion and Social Distortion. Nodding my head and singing along in a loud fashion are inevitable urges once exposed to this happy mix.

Dark Black Makeup is also faintly related to another album I recently received by Jeff. The Brotherhood, 'Wasted on a Dream'. The Weezer connection is even larger there. Radkey wins this comparison with two fingers in the nose. The band's music is so much more direct, more melodious and has a real impact. It is quite easy to imagine a crowd going all out on these songs. Punk is at the heart of these songs, so a pogo dance is allowed any time.

The dark and deep guitar foundation smears all holes out of the songs. In solos invariably air does come through in a trio line up and Radkey is not afraid to let in this air by overdubbing layers of guitars there. Over the darkness in the music, there is also a darkness in the singing. The voice of Dee Radke would have fit in a grunge band in the mid 90s or editors. The often double tracked vocals and the harmonies kick some more life into the songs though. Voice and sound fit well.

In 'Le Song' Radkey does a My Chemical Romance of a more punky variety. The "na na na na" comes close to the "original", while the Radkey song is much more direct than "Na na na na".

Deeper into the album a certain uniformity in the sound is noticeable. This debut album is not as good as the debut albums of Arctic Monkeys, Franz Ferdinand or Fountains of Wayne were. All three albums that had a huge impact on me. For that Dark Black Makeup is to punky overall. Having said that Radkey has produced a first album it can be proud of. Dark Black Makeup rocks, loud and proud. It has swing and panache. There's no denying that when listening e.g. to 'Song of Solomon'. Radkey has no fillers tucked away at the end. I have a new album on the home that I can turn to when I need to let off some steam and play something loud and to enjoy in the meantime.

You can listen to 'Dark Black Makeup' here: