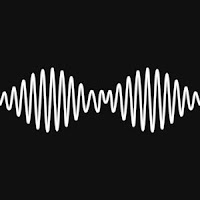 The dark and brooding, but also immensely beautiful, first single, well second single in a way, of AM, 'Do I wanna know?', gave away something. If Arctic Monkeys would have gone back to the sound of its first two albums, we would have heard a great, loud, hard-riffing, new single. Not this song, a song that's holding back all the time. A song to immerse oneself in, played loud on the speakers, enveloping, caressing. AM is not an exuberant album, but an album that sees Arctic Monkeys go off on slow, beat oriented/based songs, both moody and ripe.

In a strange way AM is Arctic Monkeys' Bee Gees album. The high sounding voices are all over the place. Also in the vocal range the band is experimenting with new lanes to walk in. I would not be surprised that in a few years time AM turns out to be Arctic Monkeys' 'Main course'. That 'Staying alive' and 'Nightfever' are just around the corner in 2015. That AM will prove to be the pivotal album to the absolute masterpiece(s). Not that the songs on AM come completely out of the blue. Remember '505', the song that ended 'Favourite worst nightmare'? A bit of an odd one out, wasn't it? Not anymore. Arctic Monkeys goes full out on potent, softer songs, singing well, laying tons of attention to intricate vocal arrangements instead of loud guitar duets. At the same time AM intrigues, surprises, overwhelms, estranges, endears and baffles.

Alex Turner searched for and found his inner Beatle. He searched for his inner hip hop rhythm and found it. His inner Bowie, his inner equilibrium and what not. But let me not forget his inner Dylan in the way he phrases his lyrics all over the place. AM is again a giant leap forwards, proving that Arctic Monkeys is the band to follow nowadays. Of course I would love to hear another 'Dance floor', 'Fake tails' or 'Teddy picker', but I would not be surprised, instead taken down memory lane of what was. Arctic Moneys can play these songs for ever on stage, setting off whole dance halls and festivals. At home they are so far beyond this. Just listen to how 'One for the road' evolves. From this empty, dance-y not-so-special-tune it fleshes out and becomes more and more intricate, with great singing and interesting guitar lines. 'Arabella' is somehow a 'Dolly Dagger' part 2, but so much better than Hendrix' song. The rough guitar accents kick fire into the song and make it special and different. 'No.1 party anthem' is The Beatles all over. The song could have been on 'The Beatles' or 'Abbey Road', no problem. 'Mad song'  has this organ and an 'oh la la' chorus, a twang guitar kicking in, that shows that Arctic Monkeys is able to go anywhere in pop history and come back winning, even with something as simple as "Oh la la". 'Mad song' is so beautifully crafted and built up just right. Van Morrison, Steve Winwood, et al may all have wished ever to have written a song like this.

And every time I have to go back to the start of the album. I can't shake the beginning notes of 'Do I wanna know?' from my mind. (Nor the beat of 'Why'd you only call me when you're high?') This song is extremely addictive. The slow guitar riff or melody, echoes the vocals, but has and says it all. It is spot on in this weird song about a warped form of love, a love that is no longer healthy for the two protagonists in this song.

Then 'Snap out of it' comes by. This up tempo semi-rocker with a great refrain and held back guitars, with again a role for an organ, has a definitive similarity to the new Franz Ferdinand album 'Right thoughts, right words, right action'. And a very, very un-Arctic Monkeys rhythm. 'Knee socks' could have been on 'Right thoughts, ...' as well with a little more exuberant arrangement. Showing how close the great talents of these two bands are. Arctic Monkeys hold back on AM, despite having found Bee Gees singing, disco, hip hop and what not. 'R u mine' is by far the most letting go song, but still not half of what it used to be. It is the tension that is built up on AM, that make it stand out, make it special and a winner.

In short, it took me circa five days, but in those five days a sort of miracle took place in my head. From being baffled, WTF is this?, to total conviction. 'Suck it and see' (2011) was fantastic, ask me again at the end of the year what AM is. This is the start of a great adventure. Remember what came after 'Rubber soul' (in hindsight for me)?, 'Their satanic majesty'?, 'Bleach'?, 'Young Americans'? It is my conviction that the one after these albums is what we are going to be offered by Arctic Monkeys soon. There is no doubt left. Arctic Monkeys are the most important rock band on the face of this planet in 2013. There's no competition. And please explain to me: why is Arctic Monkeys not playing the Netherlands later this year?