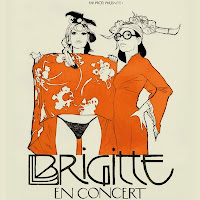 Brigitte ce n'est pas une Brigitte, c'est deux. Sylvie Hoarau and Aurélie Saada make up a French indie, folk, pop duo with a love for old style songs. Brigitte is named after THE Brigitte of course, the now in her late 70s French beauty of yesteryear. Et vous, tu m'aimes' is from 2011. Well, I've only listened to it recently for the first time, so to me it's new and certainly worthwhile to review.

The wonders of modern music listening presented me with this album. Having listened to Zaz (read the review here), Spotify presented me with Et vous, tu m'aimes. So I clicked and was drawn in this album of organic singing and a mix of old fifties and sixties pop music enchanted with modern sounding instruments. Not unlike Caro Emerald conquered the world with, except that her musical mix is based on music that's even older. Brigitte has a few songs that with some imagination takes the listener back 50 years to the days of France Gall and Serge Gainsbourg. Brigitte presents some great pop tunes, not seldom with a pleasant twist. The rhythm of 'Big bang (au pays du candide)' is special and makes it stick out, while at the same time with another rhythm France Gall would have scored another hit in 1965.

However, Et vous, tu m'aimes could never have been made in the 60s. The rhythms simply did not exist, nor were the recording techniques as developed as they are now. Et vous, tu m'aimes sounds beautiful and well-produced. Most songs are arranged sparingly, leaving all the more room for the clear sounding voices of Hoarau and Saada. Voices that twist around each other, in a way that the two ladies had me fooled that Brigitte was simply "Brigitte", harmonising with herself. The voices of Brigitte is the first winner on this album. The second is the diversity Et vous, .. offers. From the bare chanson 'Je veux un enfant' to the poppy 'Battez-vous', the brazen 'Ma benz' or the disco-ey 'O la la', Brigitte comes away superior to the competition.

What I had to get used to, is the switch in language from French to English. The camp 'English song' is funny. Other songs are serious and there's nothing wrong with them in any way, but for me they break the rhythm and atmosphere of Et vous, ... The surprising covers do the rest. 'I want your sex' in a sexy, jazzy version on the 2nd cd in the new version of the album' and 'Walk this way'. This songs are so well known and still work in this new version, almost as if they are new songs. Well done, Brigitte.

Although I have to admit that two albums in one go is a bit much, but then which double album isn't? (O.k, 'Exile on Main Street'.) As long as an utterly surprising song like 'Après minuit' comes by, with the loud verse that evolves in the dreamlike chorus, this reviewer is not complaining. Adventure is written in capitals on Et vous, tu m'aimes. Small adventures, as if discovering the content of a  cupboard within a home, like in 'Quel beau dimanche' or like an all out jungle survival as in the louder songs. Brigitte searched for the musical accompaniment a songs takes to work and succeeded. Whether it is a funk guitar, 60s French pop or traditional French chanson, the elements Brigitte needs are taken out of their context and incorporated into something very much 10s. There's a lot to discover on Et vous, tu m'aimes, vocally, musically and atmospherically.

Taking it all in, together with Zaz' 'Recto verso' there are two excellent albums coming out of France that I heard for the first time this summer. There must be more, shouldn't there? Tip us, please.