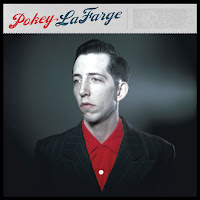 Pokey is an anachronism. The music on this album is inspired by music of so long ago, that my dad must still have been a kid. It has nothing whatever to do with 2013, but then who cares when the music on Pokey is as much fun as it is? Pokey is also the first I’m hearing after discovering Pokey LaFarge and the South City Three live in Q-Bus in Leiden. After his show last spring we did an interview you can read here if you like. Although I had heard his previous album, 'Riverboat soul', it just didn’t make an impression. Not my kind of music. After seeing Pokey live, I have changed my mind and Pokey just proved myself wrong even more.

He musical styles range from, well I don’t know really what I’m supposed to call it. There’s some jazz in there, some swing and old Americana musical styles I do not hear too often, old rocker that I am. The singing sounds just like records from before my time, on 78 RPM, bar the scratches that come with records like that, I remember vaguely. Pokey has exact the right voice for it to. Somewhat nasal, but surely pleasant. Taking it all in, it is only a little more traditional than what Bob Dylan is doing on ‘Tempest’, but coming from the same well. The instrumentation is almost fully acoustic. Guitars, washboard, bass, harmonica are the dominant instruments. Some songs get something extra, a little drums, a violin or some brass, but mostly modest, adding to the atmosphere. ‘Kentucky Mae’ is a beautiful ballad to a Kentucky girl, that is enlivened by brass, played with the brakes on, lending ‘Kentucky Mae’ a sound that is straight out of the 30s.

In the more up tempo songs it is an harmonica that spikes a song. ‘Bowlegged woman’ is a fine example of this. The band answers in response to Pokey’s lyrics. The overall sound is tighter, more rhythmic too. It is moments like this that Pokey Lafarge comes closest to a band like The Hackensaw Boys, a band he played in for a short period. More in the melody than in execution of the song. Another similarity is the way that everyone takes solos in turn, which comes with the jazz and blue grass influence also of course. The guitar solos and guest musicians are all great additions to a song. Functional and fluent.

There’s nothing more much I can compare Pokey to, as I just don’t have this sort of music. Always having to mention ‘Neh-nah-nah’, Vaya Con Dios’ hit is all I can do, just doesn't compare. Pokey is an album that I can recommend anyone to discover. The album is something completely different from anything that is usually heard in 2013. A concert from Pokey LaFarge and the South City Three is near a sensation, so well the music is played by four guys with a love for old music and dress the part. They have captured the mood of a live show pretty well and deserve to be heard. Yes, Pokey is an anachronism, but one that is great fun and brought with the love for this music, as is required. Anything else would turn Pokey into a joke and quite frankly by not listening to Pokey the joke may just be on you.