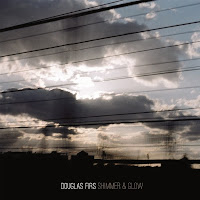 After the very positive review of Erwin Zijlemans (click here) it's time for Wo. to share his views on this album.

From the very first seconds Douglas Firs captured me. Ultimate beauty just spat off the digital airways. Intimate, quiet and very intense Douglas Firs presents itself in opening track 'Shimmer & glow'. It's either run and hide or embrace the Crosby & Nash or The Eagles harmony singing that kicks in after the solo piano notes intro is over. It's the 70s all over again as if punk never happened (and all things after). And yes, you're hearing right when listening. This is also a song on eating broccoli. Strange but true.

Douglas Firs (not to be confused with the U.K.'s The Douglas Firs) is basically a one man project of Gertjan van Hellemont a 26 year old from Gent in Belgium, who is the guitarist in/for The Bony King of Nowhere. Although the album was released nearly one and a half year ago, I think it is more than good enough to deserve a review now that I have discovered it.

Shimmer & glow is an album with two faces. Beautiful ballads are mixed with some fierce rockers. The first notes of 'I don't think you are good to have around' startled me to be honest. The guitar fires of electric riffs like if there's no tomorrow. Drums pound, like the bass does, some fuzz and a psychedelic keyboard solo. Compared to the celestial sounds of 'Baby Jack' the difference could only be larger if house beats were pumped out of my earphones. Both tracks work by the way, but perhaps not perfectly in this contrasted setting.

The reference to colleague Belgian band TMGS is a correct one (click here). Although the influences TMGS shows also have a Mexican flavour, the quality pop both bands offer is the common denominator. Douglas Firs also reminds me of the level Douwe Bob debuted with on 'Born in a storm' (click here) and has a level that Rogier Pelgrim can aspire to (click here). All acts look to a musical period that lays far behind us and find their own way in the 10s. Succeeding in finding their own sound and voice. In 'Dirty dog' the 70s claim on Shimmer & glow is highest. The jazz chords that were woven into west coast pop in those days, is a dead give away here. Harmonies are very important to Douglas Firs' music. Hence I'm surprised that they are not always dominant in the mix. This is however the only flaw that I can find on an otherwise awfully good sounding album.

Douglas firs grow to become very huge. Gertjan van Hellemont is not at those heights yet, but certainly trying to get there with Shimmer & glow. He certainly has laid down a stepping stone to reach that high. Shimmer & glow is an album to listen to intensely and to be enjoyed at leisure. Both work and that's an achievement in its own right.

You can listen to 'Pretty legs and things to do' here.