By the lamplight. Larry and his Flask 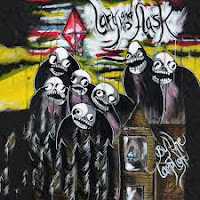 You can listen to 'The battle for clear sight' here.

Regular viewers of this blog have not been able to escape Larry and his Flask last year. After having been swept of my socks on the evening before Queens' Day, the review is still one of the best read posts on this blog ever, the band returned for another show, there was an album and EP review and an interview with Jamin Marshall. Although I missed the show in the Q-Bus last May, I did meet with Jamin afterwards and learned of a new album coming up. And here's the review.

At first listening, it's clear that the band delves deeper than before, several songs are even better, without losing any of the energy that is the basis of all things Larry and his Flask. What I noticed next is that the band is so confident that it leaves the best song of the EP 'Hobo's lament' aside, as it could easily have been added to the track list. Not that there is a lot new on By the lamplight. The basis of Larry and his Flask is a major load of enthusiasm, a shot of bluegrass-polk-jazz, some Dropkick Murphies and The Hackensaw Boys and all sorts of other musical forms that make a lot of noise and do not take the tempo down too much. Of course there's an odd ballad. Even this band needs a breather in between. It also gives By the lamplight more depth.

Although the basis of Larry and his Flask is up-tempo punkified blue grass and country rock songs, the way the band manages to vary in the approach and changes moods within a song surprises me everytime. 'Barleywine bump' is an example of such. The chorus would allow all present to shout along as if in an pub hidden in a cove in western Ireland. Andrew Carew sings here in two different ways, first as if recorded in 1930 then as 2013, also giving the song a great extra edge. The mood changes of the By the lamplight make it a very authentic experience for those who were present at a Larry and his Flask live show. Just like on 'All that we know' the band succeeds in capturing its live show energy on record. The explanation for this is, imho, that the sound of the record is not the best possible. The production could have been loads better, wider in the mix and all sorts of effects on it, with the result that it would not have been Larry and his Flask, but any other band. It takes courage and a clear view of what the band wants to be and my guess is that it has both. This is who we are and this is what we sound like. To great effect.

The biggest surprise on By the lamplight may be the ballad 'Gone from you'. Ian Cook sings this solo with an acoustic guitar. There's a spine chilling moment when a part of the band kicks in with a great harmony vocal as well. Not unlike the effect 'Alabama shamrock' by The Hackensaw Boys had on me long ago. How well the band can sing together, can also be heard on the intro of "Pandemonium', right at the start of the album.The lyrics of 'Some cruel twist of fate' are far from party music. It's about the death and burying of an expecting wife. The horn section of Larry and his Flask, also a large chunk of the acoustic string session by the way, plays passionate notes after the funeral.

Having undergone the storm that is Larry and his Flask live first, I had expected never to listen to a record. For three times in a row the band has showed me my erring ways. By the lamplight deserves to be heard at home as much as in a venue. There's some excitement, loads of it and good time party songs, but some contemplation and seriousness as well. The rare mix Larry and his Flask presents to its listeners deserves to be heard more wider than it is now. By the lamplight is a great new step in that direction.