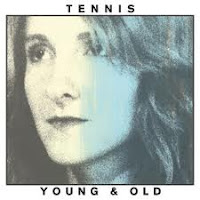 Real pop music for the young and the old. Indie trio Tennis knows exactly how to cook up a delicious serving of pop songs. With nothing else than Patrick Riley's clean guitar sounds, James Barone's drum kit and the organ and voice of Alaina Moore they achieve a full effect on Young & old, their second record after 2011's 'Cape Dory'.

Tennis is a slightly more laid back cousin of The Asteroids Galaxy Tour with a somewhat more pleasant voice. Also a bit less aimed at the charts, but just as worth while to listen to. Alaina Moore can join a line of great female singers like Nancy Sinatra, Sandy Shaw, Cilla Black, musically Tennis is more independent. With the sometimes The Doors like organ and the very clean sound of Riley's guitar I think they've created a spot for themselves in the universe.

The Black Keys are playing ever bigger venues, now that 'El Camino' brought them a well deserved breakthrough, but this does not hinder the members of producing other artists. Patrick Carney is responsible for the pleasantly clean sound of Young & old. If the pop driven sound his own band has found is something to go by, Carney brought that spirit to Tennis and helped create a very convincing album. If perhaps a bit monotonous in sound and tempo, this is waylaid by the sheer quality of the songs. Was 'Cape Dory' a good first effort, Young & old is a significant step forward.

If I'm to express a concern, then it is that I wonder how the lightweight sound will hold up in concert halls, but on record or on my head phones, the clean sounds of Young & old are very pleasant to listen to. The extremely poppy 'Dreaming' deserves airplay directly and brings the spring to your home. With songs like 'High road', another hit as far as I'm concerned, and 'My better self', Tennis puts itself in a league with acts like Joan as Policewoman and Edward Sharpe. I know that Joan holds herself quite well on stage, so why shouldn't Tennis?


All in all I recommend the record most to people who like slightly laid back, mid-tempo music driven by clean guitar lines and various keyboards that determine the flavour to the songs. Add the sweet voice of Moore and I think you will truly enjoy this record. Everyone looking for harder sounds, avoid Young & old, but you will never know whether this album is the odd one out till you've listened.


Would you like to this blog yourself on WoNo Magazine's blog? You can. Leave a reaction and we'll contact you.