The Kyteman Orchestra. A masterpiece? 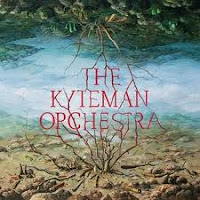 You can listen to 'The mushroom cloud' here.

At the moment that I'm starting this review, I'm only halfway listening to the album for the first time. If what my ears are sending to my brain deserves any qualification, then it's surprise: I'm not quite believing what I'm hearing. Not since Pink Floyd's 'Atom heart mother', which I bought at the age of 17 and "In search of ancient Gods' by Absolute Elsewhere, which I heard at a friend's house about the same age, have I heard anything close to that experience. The Kyteman Orchestra goes all out, holding nothing back, giving it all: an overwhelming experience. 'While I was away' just about blows the listener apart with an orchestra and choir building the towards a climax of apocalyptic level. The lonely violin opening 'Truth or dare' sets a new tone, that ever so subtly sets the listener on the wrong foot for a hip hop like song, with a great chorus. With just these few lines I hope to start explaining the extremes of The Kytemen Orchestra to the listener.

Colin Benders, aka Kyteman, has created his own universe. From what I read, Kytopia is not unlike Andy Warhol's Factory in the 1960s. Musicians gather at Kytopia and help Benders with creating his dream or creating their own. In this atmosphere The Kyteman Orchestra was made, layer for layer. The album exhumes ambition and adventure. A jazzy intro with only trumpet and piano in 'Long lost friend', brings Gershwins' 'Summertime' to mind, but very soon the atmosphere changes to a blacker shade of grey. These changes of mood is what makes The Kyteman Orchestra an even better listening experience. Members get the chance to shine one by one, in intricate arrangements, more complex by the minute. The music moves from pop, soul, hip hop to jazz and classic and even opera. Sometimes bombastic and at other phases of the album ever so delicate. 'Long lost friend' has it all in just over 7 minutes.

'The mushroom cloud' is one of the weirdest singles ever released and still gets airplay. It goes to show what the status of Colin Bender's musical efforts is in The Netherlands. Within just a few years he's allowed to take the average listener on any trip. Because a trip 'The mushroom cloud is'. There's no other description for it. '7/8' sounds like a tribute to Ekseption. Maybe a slightly jazzier version of the classical rock sound of old, but definitely a clear influence. Rick van der Linden could not have wished for a better tribute. 'The void' keeps everything very small, almost a minuet, instrumental and delicate. The contrasts on this album are clearly phenomenal and make it very, very special.

To come back to the 'Atom heart mother' reference. The Pink Floyd bombastics are not on The Kyteman Orchestra in the form of a 18 minutes all out mini symphony. Benders sticks to song structures, but tries to get in as many ideas in there as possible, creating several mini "Atom heart mothers" all on one album. Listen to 'Angry at the world' and you'll get my drift.

In the more relaxed passages Seal comes to mind, but is left behind immediately. The easy going music is at most the starting point of what's to come. Sit back, buckle up and go. Disney's space mountain is the closest description to The Kyteman Orchestra. The only certainty is that you will come out alive, but where the curves and bends are? Just hang on in there and enjoy the ride.

All this leads to a number 1 record. There's hope for the world if a creative record, a dashing effort of inventiveness can reach this spot. Not just because of the previous album's success, 'The hermit's sessions' did very well of course, but also because of its own merit as it remains on the #1 spot. So wrapping up, I can only conclude that The Kyteman Orchestra is a very special album, an almost once in a lifetime experience. Time will tell whether this album is a masterpiece. I would not be surprised if it is.

You can order 'The Kyteman Orchestra' here