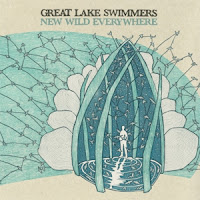 You can listen to a New wild everywhere's title track here.

Great Lake Swimmers is a band from Canada, formed around singer-songwriter Tony Dekker. New wild everywhere is their 5th album of which I missed every single one, with the exception of there former album Lost channels (2009) which I may have heard once. I guess it didn't gel and slipped of my iPod again without much listening to it. Not so with this album. New wild everywhere is in medium rotation and will remain there for a while also.

The folk music of Great Lake Swimmers gets a very pleasant pop injection in several songs. In these songs Dekker clearly is working on his songs to knead them into the perfect song. The title track is a beautiful example of this feat. A heavenly melody and a great chorus are woven into a strong foundation. Most songs of the band are intricate and delicate. At the basis is an acoustic guitar around which the songs are built. Beware, this is no music for late nights though. On the other hand it may well assist insomniacs fall asleep for a little while. Don't play the album in the background also. It'll be over before you know it and you may even wonder whether you've played an album at all. A disqualification?

No, not at all. Great Lake Swimmers have come up with an album that are in the top of their league. And not all songs are so quiet. 'Changes with the wind' is its version of rock. Drums, mid-tempo an electric guitar and a violin that plays lead lines, instead of the electric guitar.

The album can be compared to one of my favourite Americana albums Hazeldine's 'Digging you up'. Jeffry Richard's dominant lead guitar is what is missing with Great Lake Swimmers. Solo's are mainly acoustic, violin, banjo, acoustic guitar. Roger McGuinn and through him The Byrds come to mind, although Dekker's voice is sweeter. McGuinn's ex-colleague Gene Clark scores good also. 'Easy come, easy go' is very The Byrds like.

A great feature of Great Lake Swimmers is the harmonising between Toni Dekker and violinist-singer Miranda Mulholland. Scarlet Riviera and Emmylou Harris for the price of one. In both instances Mulholland is more in the background than the two ladies that lent their powers to Bob Dylan's 'Desire', but then New wild everywhere is more mellow as a whole. Still she distinctly puts her stamp on this album and lifts to a higher plain as a whole.

Moving to the end the mellowness of the album takes away the will to listen further a little. This points to the fact that just a little more variation would have been welcome. Still, before that moment enough has come by to enjoy. The best way to circumvent this fact, is starting the album somewhere in the middle. It's not that the songs at the end are less in quality. 'Quiet your mind' is quite beautiful. The album ends in French, remembering us of the fact that Canada is a to-language country (perhaps more even), very down-sized and small, in style.

New wild everywhere is everything but new or wild for that matter. It's as still as the real wild can be, the outback, the wilderness, the great wide open, everything we do not have in our small country. It's modest jewel to cherish and play when you feel like a moment of rest in your hectic everyday life.