Tim Christensen and the Damn Crystals live in Paard van Troje, with Divera

If Tim Christensen made something clear in het Paard as part of his new tour of The Netherlands following his Tim Christensen and the Damn Crystals album (review here), it is that he has the songs to play, the flair to play them and the band with him that can stroke as well as growl. Within a song too. The only thing that I do not get is: Why does this guy still play in the small seized part of a venue that isn't even three quarters filled instead of the main stage? 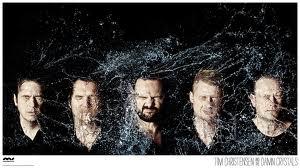 Christensen started out with the first song of his new album, the ca. 10 minutes long title song 'The damn crystals'. The song laid bare all his intentions for the evening, changing the mood from rock to mellow and ending with intense, full-out rocking. Including great harmonies, counter melodies, inventive drumming, great bass playing and the keyboards that lay a sound carpet for the rest of the band to play on. The Damn Crystals have become a band, instead of a touring outfit. In part responsible for what they play on stage, instead of playing what they're told to play. I won't go so far as to claim they played better than on the 'Superior tour' of 2009-10, but it may just make a difference in looseness, in the way they're involved and responsible.

From 'The damn crystals' onward we were taken on a trip through Christensen's solo career. With a few of the great rockers on his reportoir like 'Jump the gun' and 'Isolation here I come'. When the band walks off stage and Tim's just there with his acoustic guitar, playing 'Never be one until we are two' enrapturing the audience into complete silence, we get another glimpse of how good this guy is. Intricate, clear guitar playing, with a beautiful soft voice, singing about true love. Only one man springs to mind: Paul McCartney. Tim even has his 'Helter skelter' in the full out version of 'Whispering at the top of my lungs,' 'Screaming at the top of my lungs'. Even the bouncing rhythm is in place. Christensen has everything between singer-songwriter to hardrocker down to a T, lending his music great variety and changes of mood that he takes his fans along with.

Listening to the songs from his four solo albums to date, it is clear that Christensen is building a great oeuvre. The songs of his new album blended perfectly with the old(er) songs. 'Superiour' and 'Surprise me', 'Wiser' and 'India', with 'The damn crystals' out there in an uber category. We were treated to a show without one single dip, which I knew would end at some point, but which I hoped would go on forever. Tim Christensen and the Damn Crystals are one of the best bands pop music has on offer these days. Plain, pure ear candy.

Looking around me in the somewhere over half filled hall, I noticed a few things. The audience had hardly any youth. Most that were there were there with parents and lot of 40 even 50 plus people. Whole categories were missing. Where Dutch bands like Blaudzun and Go Back To The Zoo manage to lure all sorts to a concert, Tim Christensen doesn't (yet). At least over here. So, let him play at DWDD a couple of times! He has been on the radio, but not enough. So spread the word and if you haven't listened to him yet, do yourself a favour and start doing so.

It all ended in a sonic storm. A completely new experience. Not just the whoomp of the bass drum or bass rattling my innards, no, the legs of my trousers were blowing in the sonic wind. Was I glad to be wearing the slightest of ear protection possible without losing too much of the quality of the mix. 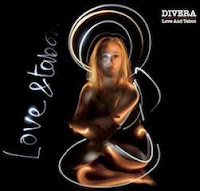 Divera is Vera van der Poel, a Dutch singer-songwriter who is active in the music scene of Amsterdam for some years, She has a beautiful voice which remains crystal clear when she takes it into upwards regions and also has a playfully lower range. Some songs were quite beautiful, others somewhat nondescript. She managed to keep the audience under her spell for a few songs, until she started to fight with her sampler, which refused work. From that moment on the spell was broken, which she never really got back. She should have improvised on the spot and play another song. With a grand finale of a song, she got some of what she lost back, which does her performance credit. It makes me wonder what her songs would sound like with a band. Maybe a next time. You can listen to her new single here.

And here's a sign of recognition: "Wow, wow, wow, wow". Giel Beelen after the live rendition of 'Happy ever after". Nothing to add there.