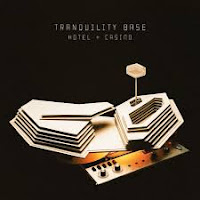 Nearly five years ago I lauded 'AM' along the lines of "what came after 'Rubber Soul'"? Five years after 'Rubber Soul' the Beatles were no more, yet had delivered three masterpieces and three good to very good albums, counting 'Magical Mystery Tour'. Arctic Monkeys was put on hold for five years and comes back with an album that comes as something of a shock. Keyboards all over the place, all tempo and beats gone and a crooning and smooching Alex Turner to boot. In short everything I had not expected to be hearing. With the second The Last Shadow Puppets album, Turner had disappointed me personally for the first time. So where am I with Tranquility Base Hotel & Casino?

That question is not so simple to answer as may show from the above. Yes, I am surprised, no, it is not what I expected, but that is only the beginning of this story.

An important question to start with is, is Arctic Monkeys still a band or an Alex Turner project? In some of the songs band members are missing. In others there are other players mentioned playing the same instruments as if several recording sessions were mixed into one. What does this tell us? Where promotion is concerned nothing. It is one front of four no longer so young men presenting itself as a band.

The music is a totally different story. There is nothing left reminding me of the first two albums, where excitement reigned large. That had disappeared all but totally on 'AM', on Tranquility Base Hotel & Casino there is not even a hint of the past thrills and musical kills. We are all nearly a decade and a half older, so less excitement is not necessarily a bad thing. (When did I last play first two albums? If I'm honest, it's been a while. 'AM' was on fairly recently.)

The new album by my favourite band of the past decade reminds me of so many things and I notice the new songs are creeping up on me slowly but surely. The rich details within all the songs are unfolding themselves slowly, opening a new musical Arctic Monkeys world to me. It is not as if Alex Turner has lost his songwriting skills somewhere in the past five years. It is that the songs are so different in texture, singing and execution that had me slightly confused listening for the first few times. Intriguing the whole is, so that led me into more listening sessions. That and a favourable inclination where this band is concerned.

What am I hearing in Tranquility Base Hotel & Casino? Prince has found his way into the whole, in the parts where there are some jazzy influences. The same goes for David Bowie in songs where he let in jazzlike structures in songs that were not easy to understand. I hear the experimental side of The Beatles in here. In the singing there are crooners of a more distant past, but again Bowie as well. Above all, this is Arctic Monkeys in 2018.

In most songs there is a dark edge. A dark guitar takes care of that with some dark notes played at the edge of songs. If anything is missing, it is a hint of happiness, as not all is bad today. The album was more or less written around the days that Trump stepped unto the world stage in the primaries and announced everything that he has broken down or seriously tried to break down on the day of this release. Days of amazement, when we all were strongly convinced that no sane nation could ever elect a (devious) clown. Well it has and the world is amazed by the day. Whether the mood on this album can all be described to the current U.S. president may be too much honour though.

Fact is Tranquility Base Hotel & Casino grows on me by the spin. It may prove a challenge to sing along to any of the songs, one of the superb traits of Arctic Monkeys in the past, being impressed more and more about what I'm hearing is not. This album is so multi-layered and holds so many details to discover that I have no doubt I'll be amusing myself for weeks and months on end. Alex Turner may have been attacked for his way of singing, in my opinion he really delivers here. The lyrics may not always make sense to me, like poetry often has a tendency to do with me, the way he delivers them is nothing but superb. Colouring outside of every line and metric he seems to become more and more an equal to Bob Dylan in his delivery.

Five years is a long time. My two favourite Domino Records bands both took five years to release a new record. Both have come up with ace records that prove that it was worth while the wait. Franz Ferdinand reinvented its spunk, Arctic Monkeys itself. Had we had more records in the past years, we would have discovered how the journey from 'AM' to Tranquility Base ...' would had unfolded itself. Like The Beatles brought us from 'Rubber Soul' to 'Abbey Road' (its last recorded album). With Arctic Monkeys fans have to take a giant leap with the band. Time will tell who fell into the abyss and who landed safely on their feet on the other side. For now I'm soaring though space quite comfortably. There's just one question I haven't answered for myself yet: Would I like to see this music live? That answer may be no.