Tell Me How You Really Feel. Courtney Barnett 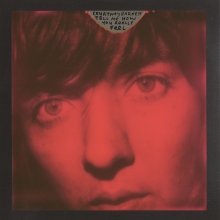 This cover could easily qualify for the most hideous ever, I suppose. The colour to me is simply too much to bear. Courtney Barnett's Grace Slick like eyes may come forward beautifully, but that is about the only positive qualification I can share with you as far as the cover is concerned.

Of course Courtney Barnett has been lauded on this blog several times for her music. Most recently while supporting her wife Jen Cloher on stage in Rotterdam (read on here: http://wonomagazine.blogspot.nl/2018/02/jen-cloher-live-with-hachiku-rotown.html). I am sure you can find the album reviews here for yourself should you be interested.

Come 2018 and it is time for a new solo album by Ms. Barnett. One indie rock fans have long looked out for. Tell Me How You Really Feel starts as deep as a guitar can go. The E string seems to have been downtuned for the effect as well. Just a dark sounding guitar, atmospherics and Courtney's voice. Slowly the song develops further with an organ and the drum and bass kicking in and I know we are alright. Men, this is so dark, yet so beautiful. Courtney Barnett hits the right feeling here completely. "You know it's o.k. to have a bad day", she sings and takes the song up another notch. Slowly building it to 'Getting louder now, getting louder now" and yes, a lead guitar explodes. Should someone in the future want to make a point in the first song of an alternative rock album, here's your blueprint.

There's no stopping Courtney Barnett. In 'City Looks Pretty' she starts rocking out like there's no tomorrow. The Velvet Underground enters the mix with a pop feeling and having worked and recorded with Jen Cloher seems to have left some traces behind also. If anything Courtney Barnett has become so much more direct. As if playing music all of a sudden has become a serious business. If anything Tell Me How You Really Feel will take Courtney Barnett to the next level. This is rock and not playing around. The little prickly elements in the songs still come forward, yet are now a part of a song that keeps flowing. The wobbly parts have all gone, sound riffs are all over the place.

Reading about how hard it was to focus her multi-thoughts on the songs at hand and how working with Kurt Vile on their duo record 'Lotta Sea Lice' and recording and touring with Jen Cloher freed her mind, it is so hard to imagine this all hearing the confident and exuberant new album she has released. Tell Me How You Really Feel is nothing but a triumph. The first listening session convince me that this is easily her best and by far most consistent record to date. The music just jumps at me. It is a must have album. Nothing less and most likely a lot more.

Even the short and weird 'I'm Not Your Mother, I'm Not Your Bitch' is a punk explosion of balled energy. The weirdness is closed in by noise and anger. Courtney Barnett tells someone for once and for all where she's at here.

Kelley and Kim Deal come by in 'Crippling Self Doubt and A General Lack Of Self Confidence'. Courtney returned the favour on the new The Breeders album, 'All Nerves'. Another firm alternative rocker that brings everything together between The Romantics to the Pixies. Pop and very alternative rock come together with no shame and a truckload of self confidence despite the title. 'Help Your Self' dares to do what Lou Reed and John Cale did for The Velvet Underground, a story told through an almost non-song. It's not my favourite on this album, but I can totally confirm that the song convinces and does exactly what Courtney Barnett wants it to do.

By the time the album finally mellows out, at a point that I am nearly floored by the energy whirling around me, 'Walking On Eggshells' does everything right once again. What a fun song, what a beauty and a piano enters the mix as well. By then I am on a 4,5* appreciation and starting to wonder whether to give that rare and exclusive 5* rating. This is something only to be given to those rare album that have an lasting and enduring impression on me. For that it is too early. Fact is that Courtney Barnett has released her best album to date and proves once again how accomplished an artist she is. And what a household the Barnett-Cloher home must be. Two such enormous talents under one roof. To be a fly on the wall there at the right moment must be really, really special.

You can listen to and buy Tell Me How You Really Feel here: