It had been 11 years since my last The Rolling Stones show and because of all the hullabaloo around the South American tour and the great movies 'Havana Moon' and 'Ole Ole Ole' in 2016 my appetite was wetted to get myself a ticket to the ArenA show as part of the 'No Filter Tour'. And I was not disappointed. The band's 38th show in Holland and my 6th in 35 years.

There is no denying that the excitement before this show is incomparable to first two Stones shows in the 80s and 90s I went to. A tension was building up for weeks on end. There's also no denying that the band isn't as good any more as they were in 1990 which may have been the most exciting show I've ever visited. De Kuip was lifted of its moorings in an orgy of music and jointly felt enthusiasm for a band performing at its best. For the first time in nearly a decade, which added to the enthusiasm. No one had expected to see them again. 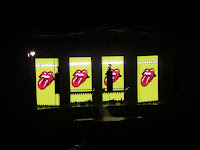 In 2017 the band members are all senior citizens accompanied by (somewhat) younger musicians who fill in the details in the background. That said, the obvious joy that especially Ronnie and Keith showed, the showmanship of Mick Jagger and the deadpan humour of Charlie Watts (an exquisite socks joke) together make for a great show. A show that was simple. The focus was on the music and not much else. The four video screens did what the name gives away, make it a video experience for the audience very far away, like me.

The sound though was great, with the exception of Keith Richards guitar, that often was far too loud. The sound quality was quite different I heard on the sides under the roof. We were lucky. No echoes or distortions and that was a first time for me in the ArenA. 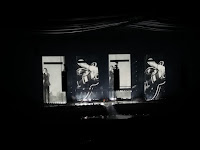 Of course for decades there are hardly any changes in the setlist of The Stones. The same songs come by in a different order, mostly from 1968-1972 and 'Miss You'. Their most greatest hits and best songs. The two songs from the blues album of 2016, 'Blue And Lonesome', were this little gift. As far as I'm concerned they could have played a few more. The band really got to steaming with these songs and not with the obligatory, lesser hits 'It's Only Rock And Roll' and 'Tumbling Dice'. The joy spread on the stage between the two guitarists, who finally started their speciality: the interweaving of guitar parts, while Jagger showed how excellent harmonica player he is. Speaking of, I have to comment on how good his voice sounded, Superb singing, Mr. Jagger. And Keith? I could totally understand what he was saying and singing. What happened to his trademark slur?

Then there's a mystery. In the setlist published on Twitter it said the band played 'You Got Me Rocking', but did I miss something? In my recollection they played 'Shine A Light' straight away after the blues set. Does anyone have an answer to that?

'Shine A Light' was a treat though. A beautiful gospelsong from the 'Exile On Main Street' album, chosen by the Dutch audience. By far the best choice possible (also because I've seen 'Let It Bleed' live a few times).

The show played itself out with the monster hits, one by one, towards the oldest and inevitable hit '(I Can't Get No) Satisfaction. And yes, they were all good. No one could complain about the songs on offer, but a surprise here and there would have been nice.

Children, youngsters, fathers, mothers and grandparents. All generations were there, passing on a legacy while it is still possible. The Rolling Stones keep up the appearance of unbreakability with its closing message: "tot ziens". Let's hope it is the case for all of us.