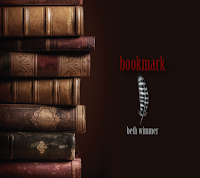 From a grand topic, 'Ghosts & Men', to one of the most unnoticed tools that are so handy and could be nearly anything as long as the tool is flat, a bookmark, suggest a step down. In a way it is, as I will get to later. Beth Wimmer is back after six years with a new and long awaited album. 'Ghosts & Men' was a near flawless album that gave the Swiss-American singer a unique voice. Her songs were embedded in an unique environment. Co-created by Italian musician-producer Damiano Della Torre, the music became the best of two worlds: European and American.

Bookmark was a hard struggle with songs that did not present themselves for quite some time. They have now and I welcome them.

The first thing I noticed that by working with an American producer and backing band Bookmark sounds more like an American singer-songwriter tending towards country album. With that Beth Wimmer lost something that set her apart, in my opinion, from most of the competition. So far for the bad news. Let's listen to the album and see where it leads me.

Like almost all new albums by an artist I truly appreciate, Bookmark came as a shock. As you following my writing may have gathered by now. The task on hand is to dive into the album and start learning in earnest. Most of the time a new relationship starts, that allows the new songs into my life. As it were they slide over the older ones and finally mix. That is what happened with listening more and more to the album. Bookmark grew and grew.

The fine details in the playing of Mojo Monkeys, the beautiful voice of Beth Wimmer and the strength of the compositions started to come forward, one by one. A few songs really stand out. One did not and the rest is of the level that I have come to expect from Beth Wimmer. So it's time for us to move down to the next level.

Looking at the song titles more closely I noticed that the songs are in alphabetical order. It's not a mistake. "It just felt right", Beth stated. So the album opens with the title song, 'Bookmark'. Listening ever closer, I notice how subtle the song is. Starting with the intro of Beth's acoustic guitar and the slow played notes of a solo, electric guitar. A love song with the bookmark as a metaphor for the love one feels for another. The song is kept small, where an explosion on the drums would have been an easy trick to expand it, a lot. Instead there is a chorus in which were some harmonies were added.

The full band comes in from the very beginning in 'Loosen My Grip'. The kind of song that I meant in my introduction to this post. This is a U.S. country rock kind of song, with the fiery guitar solo to boot. It's also a kind of song where Beth Wimmer meets the edge of her vocal range. The song as such is fine, but I find that her voice isn't meant to rock hard. Hers is a singer-songwriter kind of voice. One that sings stories. Like 'Louisiana', one of my favourite songs on Bookmark. Again the band behind her finds the right accompaniment, with another fine solo. The kind of song that makes her shine.

'Mahogany Hawk' is perhaps the finest song on the album. All Beth Wimmer's strengths come together. The  quality of the song(writing), the way her voice resonates, the melancholy that seeps through and the exactly right accompaniment. Again every one made the greatest effort to make her shine and succeeded with flying colours.

'Mexico' is more of a (serious) fun song, with the guitar sounds that go with the title. The text is clearly heartfelt. Her longing for warm Gulf waters and for her adopted country, snowy Switzerland, where she makes a pretty pair with her husband. Beth Wimmer knows how to phrase her feelings into a song and lyrics and shares them with her fans. Feelings that are instantly recognisable for many.

'Pretty Good' is a song that would have fitted in nicely with the songs on 'Ghosts And Men'. The sound is again much lighter, American, but is doing pretty good indeed. Again, the lyrics are a story told that shows how time progresses, tell of dreams that may not all have come true, but have turned out alright. The same goes for 'Simplicity Of A Man'. This song also is vintage Beth Wimmer. Another one of my favourites on the album. I'll live with the lyrics, as they are probably true, ladies.


There is one song that I do not like. Not because I don't like the song or the way that it is played, but for a, perhaps, peculiar reason. Let me explain. The song is the cover of David Bowie's 'Starman'. It is that I don't believe it the way Beth Wimmer sings it, like I believed Bowie singing it. His "young", 1972, voice gave me the idea that, against all odds, it might just be true. Here 'Starman' is a pleasantly played song of good quality (and a fine tribute to one of the truly great of course), but the magic is not there. So perhaps a song that is best not covered?

The two final songs, 'The Last Part' and 'We Can Do This', more than make up for this and take Bookmark home. Fine songs, filled with atmosphere and feeling, fitting together quite well at the end of the album.


All in all Bookmark is a fine album, that I love listening to. No, it hasn't made the impression 'Ghosts And Men' made on me, but there's never another first time with the same artist. There is of course the first impression of each new piece of music, but all these comparisons, memories and expectations throw themselves at me, preventing me from truly being open to new songs. Second and more impressions are possible though as long as I open myself up to the new work. That I did and so it's easy for me to write that Beth Wimmer has released another fine album.

Beth plays two shows in the Netherlands this week. The Leni and Peter Podium in Steendam on Friday 12 October and a private house show in Haarlem on Saturday afternoon. Contact Beth through her website should you like to attend here.

The album is released on 24 October. Watch the news here: