One. The Royal Engineers

Another new EP by another new Dutch band. The Royal Engineers has positioned itself in the segment where Gruppo Sportivo, Herman Brood and B 52s meets modern pop rock. That link is there because of the way of singing of the two ladies in the band. When the boys take over it is everything from Billy Joel and Michael McDonald or Fleetwood Mac. Pop with a slightly jazzy twist. 'One' is varied, good and extremely catchy.

The Royal Engineers is a band from Utrecht and its members are: René Geelhoed (keyboards, guitar & vocals); Butet Tamba (vocals); Simone Dekker (vocals); Rens Ouburg (guitar & vocals); Rob Den Tuinder (bass) and Michiel Buijsse (drums). Together they are able to recreate an atmosphere that takes me back close to 40 years to the days that the bands mentioned above broke big. It catches the atmosphere and the energy of the punky new wave era where the then already somewhat older artists like Hans Van den Burg and Herman Brood caught the right wave and their eternal claim to fame.

A top song in that segment is 'Hey Sister' (remember 'Hey Girl'?). The Royal Engineers catch both the energy of Brood and his Wild Romance at the time of 'Sphritz' in the playing as the fun side of Gruppo Sportivo with the singing of Dekker and Tamba as latter days Josée van Iersel and Meike Touw. 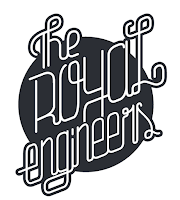 There are two ways to look at One. The first is that for a six song EP it is a very diverse album. Not one song is the same. The second one is that all six songs are different, but succeed. The quality of this band shows through each song, no matter the differences. They take on different sides of pop rock of the 70s. Some in a very direct way, others less so. 'Stay Together' is a great example. A slower song, with some great singing by the different members, loads of strings and far more serious. One listen at the chorus learns that this band knows where Abraham found the mustard.

It does leave a question about who The Royal Engineers really are. Is it a matter of too many captains on one ship or simply that the band enjoys several genres and likes to show how good they are at them? Having listened several times to One, for me it's simple: this EP is good and I would not mind hearing more in the near future.

The Royal Engineers know where the fun parts in a composition can be found at, but more importantly has found them. This led to an EP full of melodic prowess and arrangements that flesh out songs in extremely pleasant ways. Great care went into the songs so that together they are more than just the individual parts. On top of that this band understands the joy of singing and shows it abundantly. The interplay between female and male vocals are set of right and each gets lead turns, making the EP even more diverse. From the beginning of 'Aeroplane' right up to the final notes of 'Won't You Go' this EP is a joy to listen to with many little things to discover with each spin. What more can one ask from a debut EP? Not a lot.

You can listen to some songs on the website of The Royal Engineers: