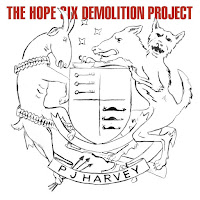 It is about five years ago that I wrote my first review of a P.J. Harvey album, in the days before the blog and of the magazine. All I ever read about Ms. Harvey before 'Let England Shake' never invited me to listen to her records. No matter how impressed I was with said album, I still never reached beyond. Now that The Hope Six Demolition Project grabbed me also, it is perhaps time to do some musical archaeological research into the 90s and 00s output of Ms. Harvey.

The story behind the record may be familiar to you, but that does not make it less interesting. P.J. Harvey travelled to Bosnia, Afghanistan and Washington D.C. to make herself familiar with the effects of war on a country and its population. This in itself is adventurous, though not unique for lets say a journalist. For a musician wanting to make a new album, it's less usual. Add to that the English countryside where Ms. Harvey likes to frequent most and the trip to war-ravaged countries (and the not tourist side of Washington D.C.) becomes even more special.

The trips and the introspection on the trips led to a serious album. An album that is full of, mostly, these easy flowing, slightly alternative songs that caress the ear in a pleasant way. Almost the opposite to the locations she visited. The explanation may be in the opening song. 'The Community Of Hope'. As long as there is hope there is life? Something like that?

Delving deeper into The Hope Six Demolition Project I find it hard to find my angle into the record. The same I had with 'Let England Shake' in 2011. What is it that makes me like the music, enjoy her voice, singing and the melodies? For some reason the answer does not present itself. Not at the 5th nor at the 10th listening session. I just do. Let that be sufficient for now and write:

You can listen to 'The Community Of Hope' here:

or buy the album here on Bol.Com: