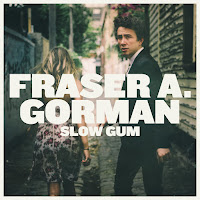 The symbolism of the cover is huge. A young man in a dark suit, white shirt. A young, (Jack Rabbit) slim man in an alley, combed up hair. What's missing is a piece of paper in his hands with writing on it. "Watch out people, we have a new Dylan on our hands", this screams out to us viewers. The first one with that moniker that I personally can remember was Steve Forbert in 1978. A very heavy handed hand of cards to get dealt. But, does Gorman hold up to the sleeve's promise?

Fraser A. Gorman is from Melbourne in Australia and a part of the clan that also spawned Courtney Barnett. As she is on route to global fame with her two recent albums, there's no reason that Gorman couldn't go the same route. Musically they are somewhat apart though. Where Barnett plays more alt-rock, Gorman's music holds a lot of alt-country features. That said there is enough rock elements in there for all guitarlovin' music fans. Besides that Gorman is as versatile as Wilco is or The Band was. The music on Slow Gum is ages old. In that, in a twisted way, the album also reminds me of Jake Bugg's debut album. No matter how different the two are.

So as far as I'm concerned all talk Dylan can stop here. The two haven't that much in common, except perhaps the same musical taste in youth, if a difference of 50 years in age makes that possible. Gorman is so much more relaxed. The Rhodes piano sounds on 'Book of Love' is so extremely laidback. The "aa haa" harmonies conceived on a tropical beach with an ice-cold beer close at hand. Under-cooled is a feature of Slow Gum or Fraser A. Gorman that shines out. Don't expect any high rolling party anthems on this album. Gorman plays his thing in different tempos, but is always in control of all surrounding him.

Slow Gum starts with a basic song. Just voice and guitar in 'Big Old World'. This Bright Eyes influenced song is not representative for the rest of the album. Here a full band is present for the next 8 songs. The sound and atmosphere Gorman and co-producer Dan Luscombe created here is clear and as wide as the song called for. Things stop at keyboards, some horns or strings and backing vocals though. Nearly the whole works, save a full symphony orchestra.

The downside to Slow Gum is that things stay extremely neat, where I can imagine that live things may explode here and there. All the embellishments are left behind in the studio. In a song like 'Dark Eyes' things get too neat and ideal son-in-law music for me. 'Dark Eyes' is forgivable though. There is enough to enjoy on Slow Gum. Gorman proves to be able to excel in different musical formats. From the bare 'Blossom & Snow', with a piercing harmonica, comes a deep understanding of this kind of music, but mind, this is no 'Going Down to Laurel' let alone 'Bob Dylan's 115th Dream', just to reference some songs that came before. Fraser A. Gorman paid a lot of attention at his first drawing lesson: he draws within all the lines.

If we allow for this neatness, Slow Gum presents where Fraser A. Gorman is at the starting point of his career, but also almost is like a state of play of alt-country(rock) in 2015. The best that is on offer is here, as conceived, written, played and sung by Gorman. He feels comfortable in all the categories presented on Slow Gum. Singer-Songwriter, country-rock(ish), alt-country, roots, everything.

To sum up, on Slow Gum Fraser A. Gorman has managed to recreate "Rock of Ages" while incorporating some more modern influences as well. Slow Gum is an album that I love to listen to. More interesting is to see how the 23 year old is going to develop himself. The past is down, but does the future belong to Gorman also? An interesting question that the coming years will undoubtedly answer for us.

You can listen to 'Book of Love' here: