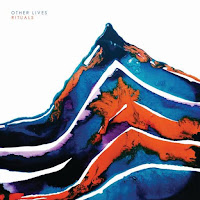 What is the same is the relaxed undercurrent that accompanies Rituals. What has changed, to my recollection that is, is that the band seems to have hopped on to the Alt-J and Django Django bandwagon; in a successful way that is. The intention just drips off opening song 'Fair Weather'. The faint sound and especially the singing, as if Jesse Tabish barely has air enough to sing, reminds me of Alt-J, without the cut up of all else going on. The link in this song to Alt-J is almost to close to call. This song could have been on the band's last album almost without any changes. 'Fair Weather' is a beautiful, atmospheric song that just floats like on thin air.

Rituals is the band's fourth album, if I count the album released in 2006 under the name Kunek. A few band members came and went and Other Lives (2009) and Tamer Animals (2011) were released. After a four year hiatus Rituals is there. Whether the four year period is warranted by musical growth, I have no way of telling, as what went before is out of my brain and from what I remember I am not going back to listen. I just wasn't impressed enough at the time.

From all I'm hearing in the first songs of Rituals, Other Lives has jumped on a bandwagon. The music on Rituals is somewhat more organic than the music on 'This is all yours'. For the rest it is the same in approach, intent and the way of playing. Perhaps it is a matter of budget and studio time that there is a difference?

In song 4, 'Easy Way Out', things change. There is a lead guitar line with a desert twang, the Calexico horns are there in a subdued way. The singing though is something different. It reminds me so much of Clinic. The staccato way of singing, doesn't match the flowing music, but is attached to the drums that play close to a march. This mix works wonderfully well, in an ultra cool way.

Other Lives, a bit to my surprise, is an U.S. based band, where I would have put my money on the U.K. The band falls into that line more, until that Calexico horns and twang come about, but for the rest, it's all U.K. new wave in a new 10s coat.

When all is said and done, Rituals is too long an album. I can't manage to keep my attention on the album for 14 songs. For that the variation is missing. All songs keep within a certain range that make my mind go wondering to other things at hand. The violins and The Beach Boys' sort of approach to 'New Fog' doesn't help. It is exactly the sort of 'Surf's Up' difficulties that make me turn from that album as well. Perhaps it is exactly that that I hold against Rituals, there is no fun allowed it seems. It is all so serious. This is compensated by moments of beauty. They are undeniably there, but a mix with songs that are not top heavy would have been welcome.

In other words, Rituals hangs in the balance of my mood. It certainly depends on my mood how far I come into the album. There are days that I "never wanted this". Other days I put the repeat button on any way. That makes Rituals intriguing, as there is no single story to the album. It can go either way on any day. For me that is quite unique.

You can listen to 'Reconfiguration' here: