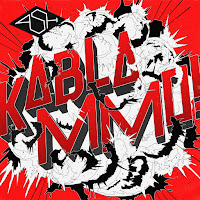 Admittedly it's been a while since I heard an album by Ash. There may be two or three of them in my collection, but please don't ask me when I took one out for a spin. In fact I wasn't aware that the band was still active. It wasn't for a while it seems, but then Kablammo! came into my possession and I gave it a spin and then a second and a third. I liked what I was hearing.

Ash is around since 1992 and I picked the band up with it's second album '1977' in 1996 (if I count mini-album 'Trailer' as its first). At the same time like a band as Supergrass. Let's call it the wave of Britpop bands after Oasis hit the big time in 1995. 'Free All Angels' (2001) was the last album I bought. Two others followed and a singles project, but escaped my attention and now after 8 years Ash is back with Kablammo!. And in the original trio setting. The band is looking its 25th anniversary in the eye. 7 Albums in 25 years in not a large score though.

Wikipedia presents the band as an alternative rock band, but also that it toured the U.S. with Weezer fairly recently, something that comes through in some of the songs, as I thought Weezer before I'd read Wikipedia. The description fits, almost. Ash blends its loud sound, consisting of a wall of guitars and pounding drums, with a search for perfect melodies. The moniker pop ought to be in there as well. 'Go! Fight! Win!' may be loud, even 'You Really Got Me' loud, but like Ray Davies Tim Wheeler keeps a keen eye on the melody of the vocals. The song has a very commercial, but extremely pleasing, edge to it. In other words, Ash wouldn't mind scoring a hit. If only this sort of music was still in fashion....

As I can't really judge the repertoire of Ash any more, all that is too long behind me, for me in 2015 Ash on Kablammo! has two faces. There are ballads on the album as well. The kind that remind me of Smashing Pumpkins in the first half of the 90s, with Wheeler as the much better singer, David Bowie of old and a band I can't my head around. That part lies in the singing. Let me settle for Suede, for now. 'Moondust' is one of those songs that get me on edge. The sweetness, the violins. Tipping points are reached and not crossed. The chorus is a winner. There's no other word for it.

That Ash has not kept its ears closed in the past decade becomes clear with the instrumental 'Evil Knievel'. The stunt man of the 70s is honoured with a song that could have been on any Muse album of the last years. Which is quite alright. 'Evil Knievil' has a right to its own existence. The song is played with great pace and holds its melody, while being short enough not to become an attention stopper. It's in songs like this and e.g. 'Dispatch' that Ash manages to blend the two bands mentioned foremost: Weezer and Muse.

The past is not forgotten as well. 'Shutdown' sounds like a 90s alternative rocker that honours the band's Northern Ireland compatriots The Undertones. The slightly punky undertone of 'Shutdown' reminds me of the band a lot and Weezer of course.

Reading what I've written so far, one might get the impression that there isn't an original note on Klabammo!. That may be very true, but skipping it because of that would be to sell one and not to forget Ash, short. Kablammo! holds many a song that is not only fun, but well thought out and worked on until perfection was reached. The songs are extremely free flowing and give the impression as if they've always been there. The interaction between producer/technician Claudius Mittendorfer and the band seems to have worked out very well. Mind, that doesn't make Kablammo! a five star album, but a very decent one that I have and will come back to regularly and enjoy listening to a lot. There is a great combination of energy, craftsmanship and melody.

Summing up I wonder who the band expects to conquer with Kablammo!? Perhaps no one. It came back out of hibernation and just gave it its all and with success, proving its right to exist. Kablammo! is an album that mixes alternative rock with some pop ballads in a way several bands try for and will fail at for ever. (Except the last song, that's a real dragon.) In this form the band pleased me more than all its previous albums have ever done. I always had some doubts there. Personally I can put all hesitations and doubts aside with this album. Kablammo! is the winner in Ash's discography, says,

You can listen to 'Cocoon' here: