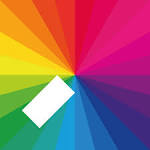 Allow me to come out of my comfort zone. Not because the all the colours of the rainbow come out on the cover of this album, but because of the music. Jamie xx is of the band The xx and that happens to be a band I quite liked to listen to and who featured on this blog before. Jamie xx is the man of the beats, if one can find them on the ultra silent The xx songs. On his solo album things are a bit different and I gave the album the benefit of the doubt.

To make an opening statement. I sat through In Colour several times so far, which is more than near any other album containing beats can claim. The exceptions? 'Moon Safari' by Air and the first Goldfrapp album. That is about it, I'm afraid. In Colour starts with 'Gosh'. Not exactly a claim for holding on as far as I'm concerned. While struggling through this song, the reward does come later on on the album. 'See Saw' with The xx colleague Romy Madley Croft, has this vibe that touches me in a very direct way. The dreamy vocals Madley Croft is an expert in, hover over the beats xx produces. Together they show that they belong together despite the context. The song is so much busier that most The xx ever does, still it works. 'See Saw' holds an organic warmth that I usually lack in electronic music.

'See Saw' at the same time brings me into a mood to listen further. The steal drum sound in 'obvs' sounds extremely far fetched, while bringing warmth at the same time. Samples fly around in the intro and a  treated voice is added here and there to bring a change to the sound, in which they succeed.

This all gets me to the song that reminds me of The xx most, 'Stranger In a Room'. His other colleague Oliver Sim is present here. The song is minimal, despite some production going on here and there. Sim sounds as if he's in a large room, all alone. Singing away as if there is nothing else, no one else. As if no one will ever hear this. He may be singing about being in a room with unknown others. The way he is singing these people only exist in his head. "Is there anybody out there?", it makes me think. Whatever Jamie xx has added underneath Sim, it is almost superfluous. That is the brilliance of his production here, without it it couldn't really exist also.

It is a song like 'Stranger In a Room' that prepares me for 'Hold Tight'. All of a sudden I do recognise the beauty in a song like this. The way the marginal melody works over the repetitive, percussive keyboard notes, undoubtedly looped and sampled or the other way around. The beats underneath that and the "singing", the sample that is repeated over and over again. I find I can listen to this.

Romy Madley Croft returns in 'Loud Places'. Singing about loud places in the totally silent verse, that morphs into a busier and soulful chorus. Another strange hybrid between what I consider a song and the kind of music which I am not able to recognise as a song. That is my shortcoming, most likely my generation gap. I just love the way the song moves into the chorus, while the "non-song" parts simply continue. Again I notice how little the two The xx singers need to sound utterly convincing. Near total emptiness is enough for them. One note here and there does the trick. Almost uncanny the atmosphere the three create together or here in parts.

The rap of 'I Know There's Going to be (Good Times)' is not for me, but that won't surprise you reading this blog. 'The Rest is Noise' sounds like Jamie xx is playing with all sort of ideas that he had floating around and mixed them all together. Some I like, some I dislike and some, well, I simply enjoy. The mood changes here and there and lift my spirits.

It all ends with 'Girl'. Not the easiest bassline here and a bit over done. Half the world seems to have been co-composing the four letter worded song, including Brian Wilson, Arther Baker and Erland Oeye and these are just the names I recognise. One large sample 'Girl' is. There are some o.k. parts, but it isn't may favourite song of the album.

In short, yes, In Colour took me out of my comfort zone and in part it was a pleasant trip. Mostly into the territory I already was familiar with, The xx. This familiarity allowed me to delve a bit deeper and enjoy some of the other songs on In Colour. Overall it remains difficult for me to enjoy music like this, but at least I've tried.

You can listen to 'Loud Places' here: