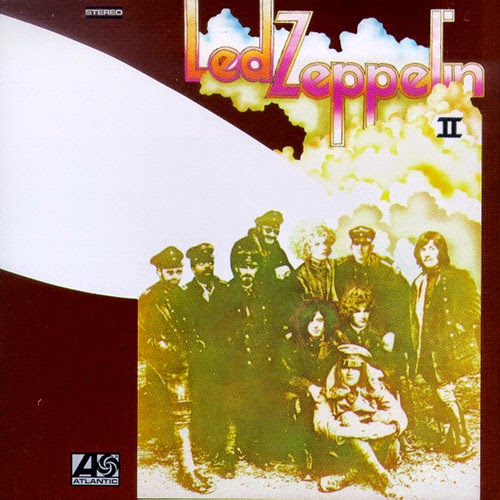 Led Zeppelin is reissuing all its records in a double format. We only focus on the original albums. Last month we reviewed 'Led Zeppelin' (in January Houses of the holy, unbeknown of what was to come). Now it's II's turn.

As a nine year old, nearly all music that I heard went through singles, usually played on the radio and, less often, at (somebody's) home. 'Whole lotta love' was such a song played on the radio, released in the weeks/days before a major change in my life: moving to another part of the country. Not only a personal, but also a musical change. Radio Veronica could not be received where we moved to, so I was devoid of new music and the Top 40 that was not to be found in this small village for some time. One song I got to know just before that move was 'Whole lotta love'. What an impact it had. Nothing compared to anything I had ever heard before. (The same went for 'Oh, well, part 1' by Fleetwood Mac by the way, but differently.) Only 1968's 'Summertime blues' by Blue Cheer must have come close. 'Whole lotta love' was so different and good. It made a huge impression on this nearly 10 year old.

That is the past. Having sung the praises of 'Led Zeppelin' (http://wonomagazine.blogspot.nl/2014/09/led-zeppelin-remastered-2014-led.html) and how in my opinion it has held up in the past 45 years, how is that for Led Zeppelin II? Not that much different, to be honest.

Led Zeppelin II was released a little more than a half year after 'Led Zeppelin'. A speed of release that is impossible to conceive anno 2014. The band came up with another record in a period that it started to tour relentlessly, bringing the U.S. to its knees within months. A new sensation from the U.K. upset the apple cart; again. II, considering the circumstances it was produced in, is a great album. Overall it is not as good as 'Led Zeppelin', but not that far behind.

The album opens with the single. The great riff, the leaking of nearly everything, echoing all over the place and the stereo effects, that I didn't hear for the first time at least five years after the release. 'Whole lotta love' is a song with eternity value, still ranked in any top whatever of the past sixty years of popular music. The adventure starts with 'What is and what should never be'. This is one of the songs that show the magic this band was able to conjure up. Mystical, almost as if being suspended. 'What is and what never should be' is not yet a perfect example. The ending is a change of course that brings the song down from its strength. The hint at exotic origins is exchanged for a rock ending and that is a shame. For the rest this song is the inkling of what Led Zeppelin was to bring in the future. The subtlety of the start, the harmonising of Robert Plant, who almost as an afterthought dares to really sing. The slide guitar that erupts after a quiet interlude. A great exercise for greater things to come.

'The lemon song' is another example of how Led Zeppelin used the past as its own vehicle. Whole sections of text were lifted straight from old blues songs and incorporated into its own song. Text, riff and all are joined into what can best be called a medley blended into a Led Zep song. 'Thank you' is a step into the right direction. The intro is what can be called a classic Led Zep intro. The organ of John Paul Jones adds this bit of mystery to the song. Robert Plant gives off the first hints at what a great singer he becomes over time and added a great vocal melody line to a classic 60s pop melody. The psychedelic interlude echoes Joe Cocker's 'With a little help from my friends' sound, but not in a way that it becomes disturbing. For that 'Thank you' holds its own more than enough. One of Led Zeppelin´s finest ballads.

Next up is the centre piece of the album. The example of a riff based song. 'Heartbreaker' rips the air apart. Jimmy Page's guitar and Jones' bass really know how to give the song what it needs. The interlude could have been skipped as far as I'm concerned. Page showing off some of his chops. Live probably o.k. On record? Senseless filling. I would not have minded it being skipped. The way the song takes off again is the more pleasant though, so seen from that angle the intermezzo has a function.

'Living loving woman' is more of a pop song with some Motown/Stax influences in combination with a tough Jimmy Page riff, but also the sort of song Deep Purple would built part of its career on. 'Space trucking' anyone? The different guitar parts make this a fun song to listen to. 'Ramble on' is an o.k. song, there's just not a lot more to say about it. It doesn't belong in the row of most memorable Led Zep songs, but is an exercise in (English) folk, that would come back later in Led Zeppelin's career in a much stronger voiced way, in combination with some rock guitars. 'Moby Dick', sorry John Bonham, is something that doesn't belong on a record. Drumsolos are only for the very best live shows at that point where the drummer has excess energy that needs to be spilled (and the rest of the band heads backstage for a smoke, a beer and probably a laugh at a band member´s expense). II ends with 'Bring it all home'. A traditional blues with a rock injection somewhere half way. Harmonica and all. Just not very original but well played and a fair ending of II, but it can't conceal that the second half of the original album is not the best side.

So in closing. Led Zeppelin II is not as good as 'Led Zeppelin', but the songs on display are almost all far above average and a few are totally top. In part II is the difficult second album, but also a step forward for the band in the process of finding its own voice. It is that balance that makes the end result worthwhile and a joy to listen to. And 'Whole lotta love' of course.

You can listen to 'Whole lotta love' here: