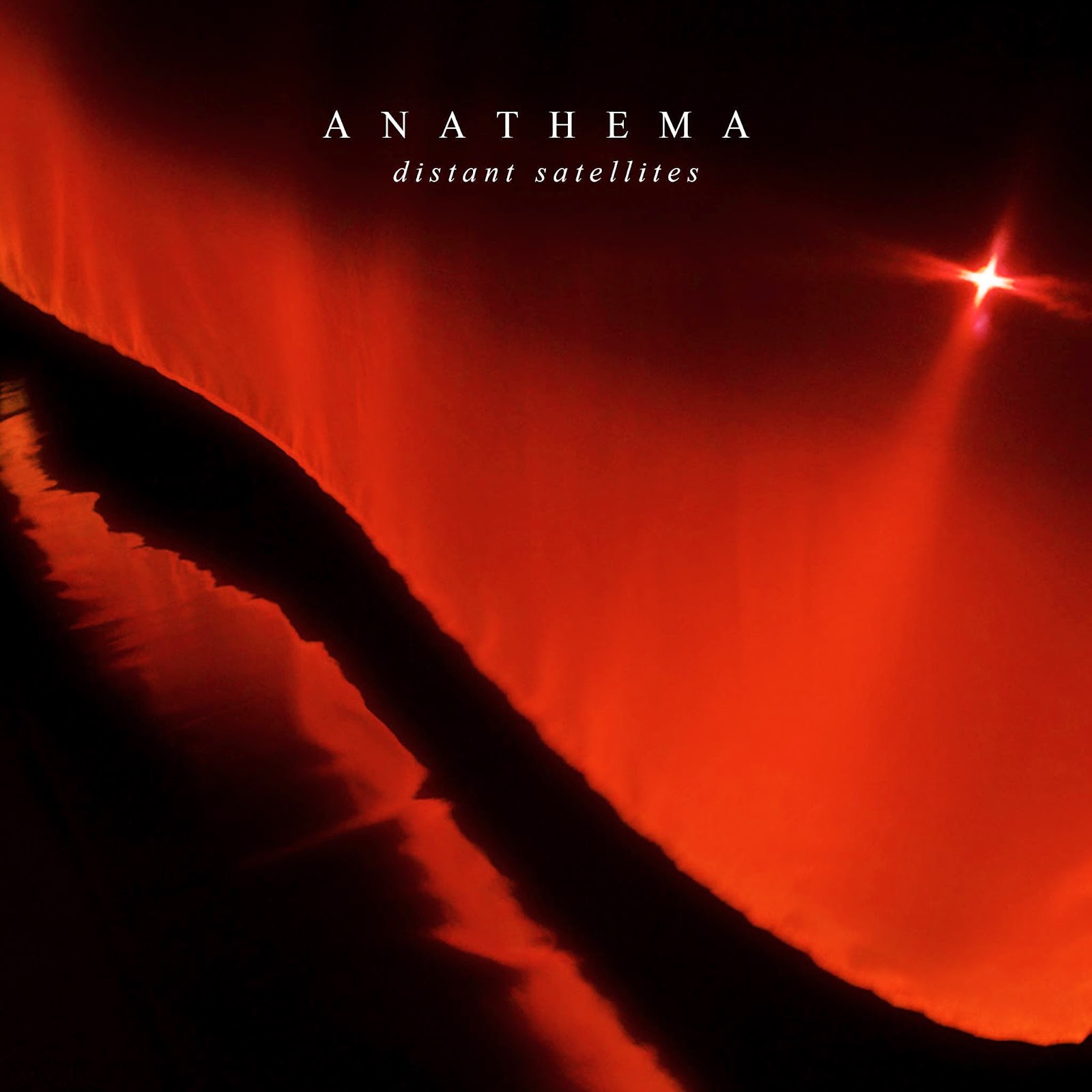 How much bombast can one person take? A lot when I'm listening to the new album of the ever more symphonic rock playing Anathema. For me this is not an album for everyday. As I got to know Anathema before the band played this standard progrock, I sort of followed them through the past 12 years or so. Off and on, sometimes missing an album. Distant satellites is one of Anathema's albums that is very much worth listening to.

Anathema is a band around three brothers Cavanagh, John, Vincent and Daniel. Together with programmer, drummer, keyboardist John Douglas, Daniel Cardoso on drums and co-vocalist Lee Douglas, the female voice, they create this wall of sound. Distant satellites was recorded in Oslo under the producing duties of Crister-André Cederberg. With the result in hand the band states that, paraphrased for this blog: 'this is THE album. Everything it has ever done comes together on this record'. A bold statement, not necessarily untrue. Anathema is, including a previous incarnation, around for nearly a quarter of a century. Most bands of that age only repeat themselves, some in a great way others just a faint carbon copy of what they used to be. Anathema is still on the road to some distant point.

What caught me first on this album is the singing of Vincent Cavanaugh with Lee Douglas. Together they cook up a passionate storm. Like the end of the world is in sight or facing the greatest challenge ever together. In 'The lost song', three parts in all, they sing together like its the last thing on earth. The music echoes their passion perfectly. And there sits the non-prog fan singing the praises of this alternating duet, solo singing by either of the two. Part three is the hard rocking version, which I like best.

The song 'Anathema' starts so soft, so slow, so almost modest and builds up to a huge climax: "I love ya". Another bold statement. The song explodes, a whole symphonic orchestra is hardly enough to emphasise the passion. It looks like the band waited all this time to name a song after itself, the moment that everything fell in its right place.

Not all is this huge on Distant satellites. There is a Radiohead like song, 'You're not alone'. Standing out from the rest of Distant satellites, less organic sounds for instance. A church organ (like) song called 'Firelight', no effects, nothing but these chords on an organ. This song moves into the title track. E-drums blend with the organ, as does a male voice. Except for the busy sounding electronic drums, nothing much happens. Another piece of quietness and atmosphere. With an extremely faint hint of 'Distant satellites' that may not be in the correct orbit for one another or worse, on a collision course. Tension builds slowly but surely in the song.

Towards the end it gets a bit too much for me, but when I take into consideration that I usually am bothered by this condition during the first song on an progrock album, it is safe to say that Anathema made a fine album. That leaves one thing left to say. A word of appraisal is in place for the great cover art. Street artist spraying themselves to death can be seen in many places around the world, creating fantasy universes. This work, by Korean artist Sang Jun Yoo, is the extra level of sci-fi art.

We no longer live in Greek nor Roman times, but this band released an album that would qualify to be sacrificed to a God or two. With Distant satellites Anathema has found an impressive balance between atmosphere, rock and symphonic rock without outdoing it. It is a fine balance Anathema keeps

You can listen to 'The lost song, part 3' here: