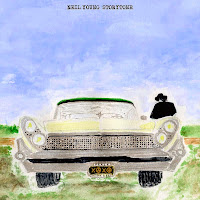 After the gimmick cd 'A letter home' ('Neil Young sings old songs in a 1950s recording booth owned by Jack White, with an authentic sound, as if sending a message home to his mother') Neil Young comes back with an album that is more than worthwhile to review. Storytone is an album with several faces. Songs that are just Neil Young singing with an acoustic guitar or ukulele in hand or at the piano, even some harmonica is played. Songs that come back in a different shape later on Storytone.

Nothing new for Neil Young of course. The 100% is new though. The contrast with his previous collection of originals, 'Psychedelic pill' (http://wonomagazine.blogspot.nl/2013/01/psychedelic-pill-neil-young-crazy-horse.html) could not be larger though. Crazy Horse is shelved again and traded for a solo performance. What this two cd set shares is that they sound inspired. Both make me want to listen to a new Neil Young cd and that is more than most other albums by Young can say for themselves in the past decade and some years.

The voice remains that mystery it always was. Why would anyone want to listen to such a typical voice? A multitude do, so Neil Young now is looking his 50th year in professional music in the face. He sounds this little frailer than before, but instantly recognisable. And hasn't Neil Young always sounded somewhat frail and wobbly as soon as his voice went up?

At the age of 69 Neil Young is in great form. Several songs are intense and very much Neil Young. Correction, as I prefer my Neil Young. There are several of them, right? This starts straight away in the opening song, the terribly titled 'Plastic flowers'. Neil is at the piano and is playing this mournful song, with a sense of regret, resignation and loss. The song is so soft, so tender. And small; at times it is as if I have to strain my ears to hear it. Believe it or not, but Neil Young has written another classic.

The theme of 'After the goldrush' is still there: the environment. Recently I read some criticism about Neil Young singing about the environment and posing with this big car. You better read up on what he did to convert his classic convertibles. If the story is true, he has every right to sing 'I want to drive my car' and sing about the environment. The question he puts to us all is valid: how far do you want to go? "This all starts with you and me".

The next song is a straight blues. 'I wanna drive my car' is nasty, pushy. A bit menacing. Again a song stripped to the bare minimum. Neil Young and an electric guitar. The simplest of riffs in the turn around and still all is in its place.

Yesterday I read that Neil Young has filed for divorce, after a marriage of 36 years to Pegi. Several songs on Storytone give me the impression that he is already singing about a divorce and new love: "I had my guard down and love passes fast" he sings in 'Say hello to Chicago'. Always easy to say in hindsight. 'Tumbleweed' is the exact opposite as it seems to celebrate a life long relationship. So there you go, Wo. Again such a small song. Neil with a ukulele singing his heart out in the most subdued way possible. Just another one of the gems on Storytone.

As said, Storytone is a double album, at least the deluxe version. Album 1 is Neil Young solo, album 2 with an orchestra. I would have been happy with one album, as the songs are the same. If forced to chose, I definitely go with album one. It is as close as an ordinary fan can come to Neil Young. Put on your headphones and you have him all to yourself. For your ears only.

You can listen here to 'Who's gonna stand up':