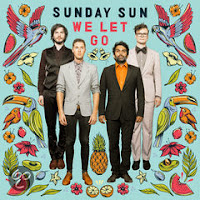 Sunday Sun is a familiar band on WoNo Magazine. The three EPs the band released in the late summer/fall of 2012 were all reviewed and followed by an interview with singer/guitarist Yoshi Breen. Two shows were reviewed in 2013 and 2014. The brilliant pop on record translated quite well to the stage. In The Hague this spring many new songs were played and an album announced, although that date went backwards with a few months. So the strange thing is that I'm listening to a new album, but several songs sound faintly familiar and not because the band is playing its influences as main trumps in the game called Sunday Sun.

Sunday Sun is a band that enjoys singing, a lot. Many a line seems to be an excuse to find every harmony and counter vocal melody possible within it. Exactly what makes listening to the band so much fun. The sun comes out immediately on the most glum and cloudy days when the four gentlemen of Sunday Sun start singing together. The Beatles come to mind straight away, but more the George Harrison part than John or Paul, although the solo McCartney of the 80s can be heard also. Some harmonies even approach the complexities of The Beach Boys. The references to the best of the 60s lay thick over We let go.

Musically the album is not so much 60s. Many songs make references to other decades as well. The comparison is mainly in the singing. In the music there's even some light forms of experimentation with sounds and electronics.

On first listening to We let go I noticed that the extreme poppiness of the first two EPs is not there. That extreme jubilation of joy and happiness is missing. The music goes deeper and does not necessarily aim for instant pleasure and satisfaction. Sunday Sun challenges the listener to delve deeper. The bar is raised, with the invitation to search and find something down there. And, did I find?

That question is harder to answer than I'd hoped. At least that was what I thought after listening to We let go twice. After a fourth listen my position is changing fast. We let go, doesn't let go of its secrets as fast as 'Sunday Sun I, II and III' did. It takes working at to find out what is hovering just below the surface. Sunday Sun hasn't lost its touch, far from it. By listening more often, it was just like the Sun bursting though the clouds on a rainy day, changing the perspective of everything on Earth.

The album starts with the first single 'I call you honey'. This is an obvious throw at radio fame. Production wise there's a lot going one. With horns, baritone sax?, and all. Pure exuberance, Robby Williams style. A major difference with Mr. Williams is the quality of singing and the harmony interludes, that make this song just a little more complex. 'Come on down' is Sunday Sun old school. As good as the best songs on Fountains of Wayne's debut album. And to that quality, again, the harmonies are added. The trump card of Sunday Sun. 'I saw you with another guy' and singing anyone? Yoshi Breen, Koen-Willem Toering, Jelle Teertstra and new drummer Dave Menkehorst can sing together like a dream. Hearing is believing! With 'Should have known better' certainly one of the best songs on We let go. In the end it's only 'Frank Jr.' I can't get used to.

So all is well in the end. It was all me, having to get used to new songs, with the old songs in my head that did not want to give up their unique position. With We let go Sunday Sun has come up with an extremely strong first (second?) album. For everyone loving extreme pop music in the most positive sense of the word, this is your album. Sunday Sun has raised the bar for itself and any other band in this spectrum of pop. Except for the cover, eye-catching but hideous, this is it: top of the pops. The cover won't stop me from listening though.