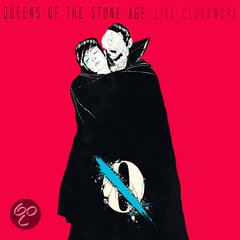 You can listen to 'My God is the sun' here.

It's eight years ago that I took my then young son to his first festival. Driving eastwards we told him again what bands he was going to see. Keane and R.E.M., he wanted to see these for sure. Arriving at the gates one of the security people asked him,: "So, big guy, who do you come to see"? "Queens of the Stone Age"!, he answered, as if he knew what he was talking about. It gained him respect though.

Six years after the dissapointing album 'Era vulgaris' QOTSA's back and how. Front man Josh Homme seems to have gone through some hardships fysically and inspirationally. It seems to have been worth it. ...Like clockwork comes close to a masterpiece and perhaps will grow into one over time.Where QOTSA used to be great in driving, harsh rhythms in which when in luck a good melody was discernable, on ...Like clockwork the band has seemed to have found the best of both worlds. The driving rhythms with eruptions, overridden by interesting melodies and contemplation. This relaxation of the mood brings the band on the one hand closer to Masters of Reality than ever before, while on the other a pop quell was beared by Josh Homme that makes his band so much more intriguing and interesting.

Opening track 'Keep your eyes peeled' is a good example of this straight away. It starts in mid-tempo, but dark and brooding with dark, distorted guitars, and changes in the time signature, "the eruptions". It's around 2"30 that the surprises start. A light intermezzo, slightly psychedelic, with more changes to come. 'Keep your eyes peeled' is only a set up to a piano driven ballad like 'The vampyre of time and memory'. To all appearances this song is the most beautiful Josh Homme has written to date. The only thing making it more beautiful would have been if Mark Lanegan had sung lead on this one. And what to say of the deliciously poppy single 'I sat by the ocean'. The song is signature QOTSA in everything, the rhythm, the melody, the singing and still it is so light in atmosphere. I don't like, I just love it. This is some addictive song!

Slowly it dawns on me that ...Like clockwork is also the most varied album by QOTSA to date. The blanket of distorted guitars that usually conceals all, has been lifted by Homme allowing the world to see more of his songwriting and arranging skills. Some Arctic Monkeys simmer through in 'If I had a tail' and the intro of 'My God is the sun', showing how close influences can go both ways, now that Alex Turner is in Josh Homme's camp also. (Homme produced Arctic Monkeys' 'Humbug'.) It is the variation which makes ...Like clockwork so special. It gives QOTSA extra depth and an ounce of plain fun. Every song stands out individually so much more. The Cream influenced 'Kalopsia' tricked me in thinking are they doing a Engelbert Humperdinck here? A little more bombast and 'Release me' is very near. The release in 'Kalopsia' does wonders though.

That Dave Grohl's drumming, Mark Lanegan, Nick Oliveri and Alex Turner sing some in the background is all very normal, but Elton John? Yes, the old ballad meister and accidental rocker is present, singing and playing, in 'Fairweather friends'. "One of the most exciting things I've ever done", Elton is quoted in NME. So would I have thought if I could have played on a song like this. The piano playing is mixed slightly in the back, but gives 'Fairweather friends' its own distinct flavour. A surprising cooperation but one that convinces.

Some rock-funk? 'Smooth sailing' offers just that. 'I appear missing' adds another level of grandness to the album. A small adventure Homme takes the listener on. The lyrics reflect his bad stint in a hospital, musically the song is allowed to drift, coming back to the central theme each time, while a lot is going on in the melody, the time signatures and atmosphere. ...Like clockwork' finally comes to rest with another piano ballad.

Josh Homme it seems does not hide any longer behind a wall of sound, aggression and loudness. He shares his inner self and lays it bare for all to see. "From here on it's all downhill", he sings. That remains to be seen. It seems like Homme has found a new well to drink from after the first one dried out. Whatever it is that is in the water, I like it. Keep drinking, Mr. Homme.

A last word about the album cover. An alternative to Klimt's 'The kiss' in Schiele style? Who knows more?