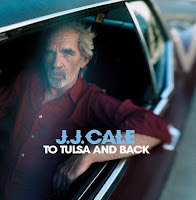 You can listen to 'Travelling light' here.

There was a time that I considered myself a J.J. Cale fan. It must have been around 1980 when I discovered that deliciously laidback sound of 'Shades' followed by 'Grasshopper'. 1989's 'Travel log' was another favourite and, as far as I know, Cale's latest album, 'Roll on', received a good reception in WoNo Magazine a few years back. 'Okie' I only laid my hands on in the 00s on cd. Don't ask why, I don't know, but liked it instantly.

Can an artist have a career on just "one song"? Yes, several one day flies do. J.J. Cale has many more songs, some of them were even made famous by the likes of Eric Clapton or Santana, but basically has one trick. A trick that can vary in tempo, vary in sound and even lead instrument or backed up by a female voice, but it all comes down to a sound in which unstressing is key. There is no mistaking a J.J. Cale song for anything else. In a sense that makes him a one dimensional artist, but when the inspiration is there, nothing beats a J.J. Cale record when I want to hear something relaxing in the background, that can make me dance at the same time. The cool mix of rock and roll, rockabilly, blues, jazz, country and pop all played with a touch of and the ease caused by California sunshine, constitutes something which is nothing but unique.

The balance always seems to be delicate with J.J. Cale. There are several records that I just can ignore totally. There's not a song on them that I really like. Others I treasure from the first until the very last note. One thing's for sure. The secret isn't in Cale's voice, he sounded like a pensioner in the 70s, while still in his thirties. His voice fits the music like a glove though.

Career wise J.J. Cale's career started very late. Eric Clapton seems to have heard a demo of 'After midnight' by chance, pimped the song and thus scored his first solo hit in 1970 after leaving Cream. It ensured the possibility for J.J. Cale to record his debut album 'Naturally' (1972). After that he kept putting out records regularly till the 90s, after which I lost track for a while. In 2006 there was a major comeback with Eric Clapton on the duo record 'The road to Escondido', which led to a Grammy reward.

Apparently playing live was not one of his favourite past times, although the 'Return to Tulsa' documentary seems to contradict this. I remember an ex-colleague describing a show in 1979. "He was sitting in the shade, not coming forward at all to show himself and still it was fantastic". (Reminds me of Dylan in the 80s this story.) It all adds to the mystique.

The first J.J. Cale songs I remember listening to were 'Cocaine', 'Travelling light', and 'Hey baby' from 1976's 'Troubadour', taped from an LP list show on the radio. Clapton of course pumped up 'Cocaine' in 1977, a song which most likely is still a staple of his set list. Although this fact seems to sum up most of Cale's career for most people -he writes songs and Clapton plays them- several of his albums made the LP lists in the 70s and 80s. Beyond just a favourite of reviewers, J.J. Cale reached an audience in The Netherlands. For me J.J. Cale's sound was something that was new in 1980. Something to discover, so much warmer than the clinical music of U.K. new wave in 1980. Let's hope that there is a new album on the shelf waiting to be released with the quality of 'Roll on'. That would be a nice farewell. In the meantime I'm enjoying 'Shades' for the umptieth time.