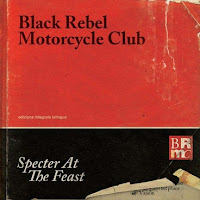 You can listen to 'Let the day begin' here.

B.R.M.C. is an album that I played a lot at the beginning of this century and especially 'Whatever happened to my Rock 'n' roll (Punk song)'. This big fat rocker was a seminal song, one that Black Rebel Motorcycle Club will never topple. I think that is safe to conclude 12 years down the line. BRMC developed itself from a garage rocking band to an acoustic blues influenced band and back. Not that most albums weren't good, they sure had their moments, but somehow BRMC never delivered its promise in full.

In 2013 the band releases its seventh album, Specter at the feast. At this moment I have played it more than any album since B.R.M.C. of 2001. Again the music on the album shoots off in several directions, but somehow, at least in my humble opinion, the songs are more ambitious, more focussed and better. 'Lose yourself', the song that ends it all, is this slowish anthem that just goes on and on, but is so shatteringly beautiful, that there remains only one thing to do: turn it on again. (I'm skipping the eastern sounding, gamallan like intro and outro to the album here.) 'Lose yourself' seems to drag itself forward, while at the same time it has this melody line that is totally addictive. The bright guitar against the sluggish background. This is a song.

The album starts equally strong. The fat distorted bass blends in with the "eastern" sound. Those who listen carefully, hear the vocals repeated in a whispered way, giving 'Fire walker' uncanny, ghostlike quality. The song builds out slowly, guitars, keyboards/electronic sounds are added and vocals that could have been part of any Radiohead album since 'Pablo honey'. If anything, 'Fire walker' invited me to pay attention.

In between BRMC rocks out, holds back, varies in tempo and does just what it is good at. Making music that is impossible to reproduce as a trio, but has all these interesting features. Layer upon layer of guitars, vocals and distorted sounds that never give the impression that spring is breaking any time soon, but is interesting to the point that I do not care if winter continues just a little longer. 'Returning' is another dark BRMC style ballad that hardly allows a ray of light in. It only goes to show that true beauty exists in darkness also.

There's one influence I would like to point out that may not seem so evident in discussing BRMC, but here are The Beatles once again. 'Lullaby' is at Beatles as Beatles songs come. The lead guitar may be un-Beatle like, the melody?, the chord progression? I rest my case.

O.k., there may be no 'Whatever ...' on Specter at the feast, as a whole BRMC latest effort beats 'B.R.M.C. easily. The songs are better, more developed, there's more depth, just more fun to listen to consecutive times. Specter at the feast is a step in the right direction of fulfilling that promise of 2001. Great fun!

You can order Specter at the feast here