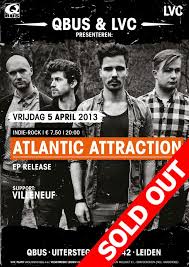 You can listen to 'Another one saved' here.

Friday night 5 April was a big day for four young men in the Q-Bus: their new EP had its official presentation. 'Home' was presented and went on sale that evening, while they rocked the sold out Q-Bus. Atlantic Attraction rocked the house.

To be honest, I would never have seen Atlantic Attraction if Villeneuf, the band I reported on regularly off late, hadn't played as support act. Lebbol reports on the support slot here tomorrow. I decided to turn my attention on Atlantic Attraction (after having enjoyed a great Villeneuf electric show).

The first thing I noticed, is that these boys know how to rock. After the first two songs their confidence grew and the audience got to see the best they have. A tight rhythm section, with interesting breaks and rhythms, a supple, pumping bass, lending the songs authenticity. Over this all lead guitarist Arend Lakke plays high flying patterns and notes. Atlantic Attraction also has a budding ear for melody and harmony, although there is more to be gained here. Finally the band is able to play with dynamics, making songs so much more interesting.

Keeping in mind that I had never heard any of the songs before, I took a look at the surroundings also. The second thing I noticed is that Atlantic Attraction takes its presentation seriously. There is a logo playing with the letters of the bands name, in an almost Rietveld chair kind of way. It's displayed in black and light at the back of the stage. There is a back drop with artwork corresponding with the new EP's artwork. And a light and smoke show not belonging to the venue. All showing that Atlantic Attraction, a name that is derived from, according to the band's website, a former l'oreal anti-dandruff brand, is on the move to greater things. 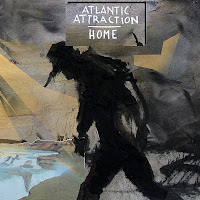 Whether they get there remains to be seen. The Johnny Depp looks of singer/guitarist Kevin de Haas may help. There were loads of young girls present, so who knows? Turning back to the music. Atlantic Attraction plays songs between indie rock and stadium rockers. Some songs have the same big antics like Coldplay and Keane are so good at. Let me give the build-up of 'Politics' by Coldplay as an example. Atlantic Attraction offers these moments also. The big gestures like Kane have not gone by unnoticed as well. There is The Edge and Johnny Buckland like guitar work in the lone notes, the continued note patterns and half struck chords high on the guitar's neck. On the other hand Atlantic Attraction also convinced with an acoustic guitar driven ballad.

Atlantic Attraction is a band that is on route to a greater goal. With things to learn, sure, but has a presence, rocks and is in possession of a few songs that deserve attention.

You can order 'Home' here.