All hail bright futures. And So I Watch You From Afar 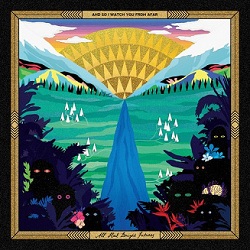 A whole mouth the full this band's name is. Just like that other one from the US that the music on this album regularly reminds me of, ...And They Will Know Us By The Trail Of Dead. There are many differences, like ASIWYFA is mostly instrumental, while ... Trail of Dead has a great singer, but still. Instrumental albums do not come by often on this blog, as in none, so a nearly instrumental album is something special and All hail bright futures is just that.

Starting with the album cover, all bright colours, but a strange mix of styles. As such it is representative for the album as a whole. Here I also found this strange mix of eclectic happy moods over a at times leaden, dark bombastic sound. The atmosphere is one of optimism and openness. The listener is invited in to follow all the bends and curves the melody takes and to embrace the different sounds and instruments on their route through the songs.

And So I Watch You From Afar is a four piece band from Belfast in Northern Ireland. Two guitarists, Rory Friers and Niall Kennedy. Jonathan Adger plays bass and the drums are struck by Chris Wee. The band is together since 2005 and produced two albums and two EPs before 2013. The ideas for the songs come from Friers and are arranged by the band into the versions we hear on record. While listening, it is quite clear that the band invites other people to play different instruments, horns, violins, keyboards, melodica, e.g. come by adding to the mood of songs, making the overall sound of the album very interesting. The music may be in line with the cover, it's not with the band name. The music on All hail bright future brings loads of impressions, but not of someone watching things from afar, scared, not-committed or walking away. All but even. To be honest, I do not know another band with hardly any lyrics that draws me in so much.

ASIWYFA has a great trick in its music. Extremely busy songs have these points of rest. Where drums and bass pound away, a few sparse note on a keyboard can create the impression of a ballad, with all this tempo going on in the background, before a song like 'Mend and make safe' really explodes with loud and distorted guitars. Where it started almost The Beatles like.

Opener 'Eunoia' says it all really. "The sun is in our eyes" sings the whole band. As I wrote, nearly instrumental. ASIWYFA introduces chant like singing into the songs. No one really sings, they sing together, making it special, different from other bands. Sometimes just repeating one line, or in 'Ka ba ta bo da ka', playing with baby syllables in a melodic way. A bit like Django Django or Everything Everything, but then in a more rock setting.

There are also some prog elements flying about, but never in a 10 or 20 minute epic version of prog. 12 songs in 43 minutes attest to that. It is in the sound of the keyboards (or treated guitars?) in a song like 'Things amazing'. The sound in the title song, the heavy guitars that play this fun melody, that is broken up by a "solo" on concert bells. Going over the twelve songs, it becomes clear that nearly everything is possible within the context of instrumental rock. ASIWYFA does not fence itself in in any way. And that, together with the happy vibe, is what endeared the album to me, an album totally out of my natural musical habitat.

You can order All hail bright futures here