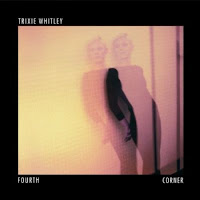 You can listen to 'Breathe you in my dreams' here.

What an album! It has me dazed and confused for several days now. I'm wavering from pure admiration, to surprised astonishment. Am I really liking what I hear? It all started with photo's of a hooded Trixie Whitley I saw going with the album. And the remembrance of the bare, harsh music her father Chris made. The combination made me not listen to Fourth corner for a while. Postponing the confrontation for as long as possible. The favourable reviews did not draw me nearer. Last weekend I took the bull by the horns.

Am I liking what I'm hearing?, I asked myself several times, but did not switch the album off. Man, this could be Mariah Carey or Whitney Houston songs and I have yet to hear the first song I like by these ladies. (Okay, Mariah's Xmas song is fun for a few days a year. That doesn't count.) Quite a few songs could be on an R&B album, but with a totally different production and arrangements. The atmosphere Whitley creates together with producer Thomas Bartlett! Most songs have a secret tension, just listen to 'Silent rebel Pt 2'. This song comes close to what Nick Cave is doing on 'Push the sky away'. Trixie Whitley can not get a bigger compliment I guess, as Cave's last album is near flawless. So, yes, I had to admit that I was liking what I'm hearing.

There's is some Anouk in Fourth corner, 'Breath you in my dreams' is a good example and in the way she sings certain passages. Even a little 'Moon safari' era Air without the beats, the keyboards certainly. 'Hotel no name' is Patti Smith influenced. But most of all, I find that Trixie Whitley sings so pleasantly, so at ease. She is able to sing with total passion, evokes deep emotions, but she is also able to strike a light pose. She does not go over the edge in histrionics for the sake of vocal acrobatics. Just like Bartlett keeps the music within boundaries. The accompaniment is basic, with embellishments where possible to reach the right effects. The harmony singing in 'Gradual return' shows this. A light touch in a song about determination, sung and played with a touch of fanaticism.

The more I've heard Fourth corner, the more I start liking it. To hear a song like 'Hotel no name', a rhythm & blues song mixed with a harsh guitar sound is a treat. A combination that I do not hear every day. The surprise is when Whitley switches from R&B singing to the sing-talk style of Patti Smith, totally changing the mood of the song, while the band in the background continues doing this punky thing. This is the secret to the success of this album. Trixie Whitley is allowed to shine in each way she wants to. Whether she sings a ballad like 'Morelia' or songs that are a lot rougher, it's her voice that shines, in all modesty and strength, making Fourth corner a beautiful debut album.

Although Trixie Whitley is active in the music business for over a decade, Fourth corner is her first solo full length album. From the first song she captures and offers the listener an adventure, invites him to jump on board with her and does not let go till the very last word. Yes, I think it is enough also, Ms. Whitley. Fourth corner is another shining gem released in the first months of 2013. You better check it out!

You can order Fourth corner here