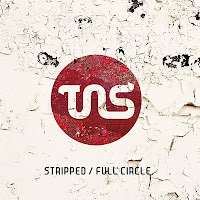 You can listen to 'When we collide' here.

Full circle is an album that has a full production. It rocks mildly hard, mostly within the lines, but excels in these bridges that allow a small change in the sound, by adding a piano or keyboard. The guitars sound nice and dirty, the drums are hit hard. The singing regularly moves towards emo, as there is a lot to digest for singer/writer 'Nax' Stok. You can read all about that on Wikipedia.

The New Shining can be heard regularly on the radio these days. Perhaps a bit more with songs from 'Stripped', but I can only add that this is only as it should be. A Dutch band that can come up with songs like the The New Shining does on Full Circle should be heard on Dutch national radio and tour like crazy. The songs are far above the average and compete with bands on offer from the US that excel in songs like this. The influences I hear range from Guns 'N' Roses to Roxette in rock mode, like in 'When we collide'. Most songs have a pop edge that makes the band acceptable to more people, but probably abhors hardcore rock fans.

On Full circle the band doesn't fall into the trap of making the songs to poppy. This is a hard rocking band, but sweetly mixed, that puts progrock and ballad elements in its music. 'Lay down your head' could become The New Shining's 'Kayleigh'. There's some The Smashing Pumpkins like heavy riffing in there. 'Burning down love' is Corgan/Iha assisted by Slash guitar antics in a Vandenberg kind of a song. Full circle has some The Moody Blues elements as well. In 'Return my heart to me' Stok even sings like Justin Hayward. My Chemical Romance without the over the top pop elements. 'Telling lies' is a great exuberant rocksong with loads of familiar sounding references and still original.

These moments of rest makes the division between the two albums not as strict as it may seem at first. Full circle has its laid back moments, which adds to its flavour, making it more diverse. Like a great, multi course dinner. 'As we grow old' is a beautiful ballad, without becoming to tacky like a Foreigner ballad from the eighties. At moments like these, the bands comes close to other Dutch bands like AlascA and even Sunday Sun. Without the great harmonising though. A good ending for a pretty convincing album

Taking it all in I'd say that fans of melodic rock have a good buy with Full Circle. The New Shining clearly knows how to write and record a good rock song and knows how to vary within this genre to keep it interesting for everyone and could even appeal to those not to keen on rock as well. And you get 'Stripped' for free.

You can order Stripped/Full circle here