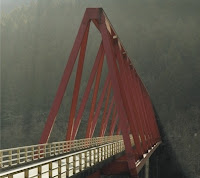 You can listen to 'Shiny things' here.

Any one claiming that Fanfarlo is to be classified under Arcade Fire influenced is more or less right. The sound of the band has similarities to the Canadian band. At the same time I notice enough differences that makes its latest effort Rooms filled with lights stand out as an album in its own right. To be honest the album reminds me of another band much more.

Fanfarlo is steeped deep in new wave and UK bands that came to the fore around 2004 and most of all what Dogs Die In Hot Cars could have evolved into, had it not left the scene after one utterly brilliant album, 'Please describe yourself'. Singer Simon Balthazar definitely sounds like Craig McIntosh. He has the same slightly lilting quality to his voice and phrasing as if he's singing just behind the song. A reason to prick up my ears: What's happening here? It stops there as Fanfarlo mainly plays songs in the mid-tempo range and allows instruments beyond guitar and keyboard to take precedence in a song and actively uses the space between the different instruments almost as a non-existing instrument. 'Tunguska' is a great example of this approach. A fairly bare song with great accents made by horns and keyboards over which an interesting, but slow melody is sung by Balthazar and Cathy Lucas. Hey, some songs are just stripped bare and rebuilt almost in 'Eleanor Rigby' fashion.

And so the Arcade Fire connotations are more or less left behind by Fanfarlo. The bombastic sounds on the last two cds of Arcade Fire are nowhere in sight on Rooms filled with lights. Fanfarlo excels in subtleties in most numbers. On 'Tightrope' the tempo goes up, bringing DDIHC into mind again, bit still the light version because of the fairly unique instrumentation as there does not seem to be a limit to instruments that can be used on the album. All sorts of (melodic) percussion instruments, a violin, mandolin, different keyboards, etc., all adding to the variety Fanfarlo offers on this album.

All in all the sixties garage rock like organ sound (not rhythms) and the new wave like approach to some of the songs should be to the liking of Joe Jackson Band and perhaps even Talking Heads fans. The same goes for those that enjoyed Django Django's first album, where the quality of the songs is concerned as they could have sounded like this. And as 'Bones' brings some songs of The XX in mind, because of the very spacious guitar notes, it is slowly revealed that everyone  loving mid-tempo adventurous songs will find something to his or her liking on this album.

So finishing up I find that I've listened to an album that is not breathtakingly provocative or new, but to an album that is pleasantly traditional and well crafted. Rooms filled with light hardly wavers from a constant quality, not up nor down and that is where we come to the only flaw: it does all seem to pass in one line when not listening attentively, which is not always possible. For the rest well done and very enjoyable.


You can order Rooms filled with light here