This machine. The Dandy Warhols 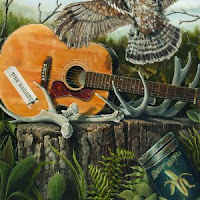 You can listen to 'Sad vacation' here.

The ultimately trippy 'Not if you were the last junkie on earth' was my introduction to The Dandy Warhols. Their 'Bohemian like you' was inescapable for a while thanks to the add. It got everyone oohh-oohing. My former band even covered it for a while. But after that? Most albums sounded a bit more like the same and The Dandy Warhols weren't exactly the most exciting band in the world to start with, were they? Still every time a new album was released I took a listen. I'd been surprised before.

This machine is one of the albums that instantly turned to my better side. If you asked me why, I couldn't really answer you. Corey Taylor-Taylor is singing as listlessly as he usually does, the songs are mostly mid-tempo. So that's not it. Pressed harder I would probably tell you that '16 Tons' is a funny, sort of kinda jazzy song, with a honking sax and Taylor-Taylor singing in a lower voice. That 'I am free' is a lightweight, freeflowing song, with again copper sounds all over the end of the song. There's nothing highbrow going on and nothing so far out there that it was a lot of fun making the music, without any thought to the persons needing to listening to the result. Some of The Dandy Warhols' jams of old deserved that description.

This machine holds songs with a lot of sixties garage rock full with psychedelica infusions that take all the rough edges off, but songs they are. 'SETI vs. the Wow! signal' has this great, direct and slightly distorted guitar riff going on that gets me on the edge of my chair immediately. George Harrison could have been proud also in the way a 'Within you without you' like melody is made softer, made more beautiful with a 'Once upon a time in the west' like harmonica sound. Trippy, o yes, very. 'Don't shoot she cried' must have been the result of something with mushrooms. Too long, but at least the start is very intriguing.

The effect This machine has on me, is that it makes me curious about what's to follow on the album and that is another main difference with several albums before it. This is without being brilliant, because not one song on the album is. The Dandy Warhols is not one of the top bands in my league, but a band that that hovers on the periphery, sometimes in, mostly out. Another effect of This machine is that most songs put a smile on my face, a pleasant one and that is always nice to notice. So all in all I wanted to do the album justice and share this feeling and impression with you.

I can't promise that I will still play This machine a year from now, but for now I'm having fun. Let that suffice.

You can order This machine here