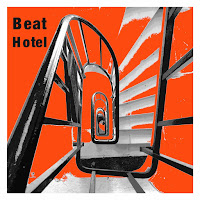 Sometimes a record comes my way that just pleases. A record where nothing new happens, that just sounds familiar and tickles my fancy. Beat Hotel the mini album of the band with the same name is such an album.

Beat Hotel is an album where influences from 80s and 90s indie rock come together as if I'm listening to the original thing releasing a new album after decades of absence. Take one of the singles Beat Hotel released preceding the album. 'Bury It Deep' sounds like as if The Smiths and Fatal Flowers blended into one band. It saves The Smiths from Morrissey's whining (it just gets to me after a few songs) and gives an extra oomph to Fatal Flowers. A band that can do that, knows how to write an interesting song and execute it convincingly. 'Bury It Deep' has that quality.

I am not going to analyse each individual song this way. You can find your own favourite bands of the past in Beat Hotel's music, no doubt. What I want to convey, is that although Beat Hotel without a doubt leans on the past, a lot, the band comes up with its own good songs, so I can live with this love of things past. (As far as music is ever past, as I can turn on anything I like, any time.)

Beat Hotel is not a new band, although this mini album is its first release. The leading members met in 1988 and decided to make music together, while playing in a host of bands, all unknown to me, while entertaining the idea of what would become Beat Hotel. Resulting in all members must be of a certain age, somewhere between young and old. All this history has led to a pleasant pop-rock album, led off by two rocking singles, 'Feel It' and 'Bury It Deep', where the rest of the album slowly moves into alternative ballad territory. E.g. with the soft cover song 'Beat Girl' and the high tingling 'Daddy, I Drown'.

Beat Hotel is nothing new but certainly worthwhile getting acquainted with. I have and enjoyed every moment I've spent with the album.

You can listen to and buy Beat Hotel here: