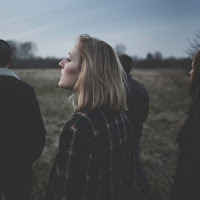 Joes Brands, a name that pops up more and more on this blog. The LVE's drummer is also a producer and the artists he works with are able to find their way to this blog.

So here is FELIZ, a band from Flanders, singing in Dutch. FELIZ is also a story about a band wanting to release its songs. Songs it believes in and has the drive to make sure we can all hear the songs. What a lot of people tend to forget or simply do not realise is how costly making music is. Not just the investments in instruments (let alone the time invested, but that starts as a hobby), but the recording process, the pressing of records, the distribution, etc., etc. Dozens of people make money before the artist, who created the music from nothing, sees a first cent. If ever these days of The Pirate Bay and Spotify.

FELIZ worked hard towards this release. Through a crowdfunding project it starting playing living room shows until it had the € 10.000,= together it needed to step into Brands' studio and record the songs. 100 Shows FELIZ played in order to invest. Of course that comes with benefits. Songs crystallise itself by playing them more, new ideas will have presented themselves on route to the end goal. None the less, respect is due to the band and the love of its music.

So, let us focus on the music. FELIZ on its first EP presents the world with a relaxed sort of music that combines a pop feel with a dreamy atmosphere. In front is singer and guitarist Lise Reyners. Her voice is slightly breathy and thin, while touching on a deeper feeling and depth in the right places. Her voice matches the music around and behind her perfectly.

That music is absolutely clear, almost transparent. Mixed in a way allowing me to look straight through it somehow. The drums are positioned in such a way that the different elements are mixed separately, creating a broader sound behind the band. Something easily to spot in 'Alles Anders' as the sound is so transparent and clear. Pieter Van Hecken doesn't play more than strictly necessary, no drumming pyrotechnics here.

Around the drums several layers of music are built. There are synths involved and a piano. If there is a lead instrument in FELIZ, it is the piano. Slow notes are sprinkled over the song, adding to the dreamy atmosphere that is the foundation of FELIZ' music. The guitar is a rhythm instruments, at most playing arpeggios. (Yes, there are a few solo notes in 'Mijn Huis'.) The synth lays the embedding of most songs. Long drawn chords filling up some space in the mix.)

The lyrics are a mix of fond memories and feelings of doubt, hurt or wonderment over things that have left and gone away. "I never said it was over". "I am feeling far too much". "We cannot wake in the shit we've created". Just some (translated) examples of lyrics sung by Lise Reyners, someone who believes in the healing qualities of sleep. Something more people should be able to allow to happen to them.

Producer Joes Brands has provided FELIZ with a clear sound that brings out the strengths of the six songs on the EP. Songs that are a joy to listen to, songs that have that mood, the FELIZ mood. Fans of Hanne, Mevrouw Tamara, The LVE and Elenne May should certainly listen to FELIZ EP'. The same goes for all others who like soft pop and melancholy songs with a beautiful clear sound.