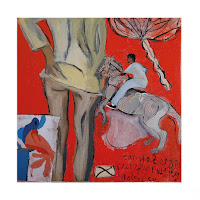 It's not even one and a half year ago, that my review of the debut album of Canshaker Pi made it to this pages and shot into the list of best read posts ever. The album came too late for my end of year list of 2016, but is on the shortlist of best albums of the 10s. (Read on here: http://wonomagazine.blogspot.nl/2016/12/canshaker-pi-canshaker-pi.html) And that is what Naughty, Naughty Violence is up against.

The album kicks off with 'Pressure From Above'. A title that may have to do with what the outside, people like me e.g., heap unto these youngsters by telling them just how great their album is. If this first song is the standard Naughty, Naughty Violence sets, things will just turn out nicely.

The edgy riff 'Tonsil' starts off with, is the kind that make me feel happy instantly. Everything is on edge in 'Tonsils'. The two guitars playing notes on the edge what is acceptable to the average listener (probably beyond), yet always come back into the fold at the right moments giving 'Tonsils' a great punkrock feel. The same goes for the vocal melody singer Willem Smit smacks right into the faces of his listeners. There's not a whole lot being held back by him and his fellow bandmembers.

What I notice listening into the album is the ease with which Canshaker Pi is delivering its songs. Despite the fact that the band does not present its songs in a straightforward way, it all just seems to flow as if there are no hurdles thrown up by the band itself. As if there are no weird chords or disharmonious notes involved at all. It is that combination that I like so much in the first place and recognise instantly on the new album. Where I hated some of the bands Canshaker Pi must see as its influences, I can't help feeling happy listening to its music.

Naughty, Naughty Violence is an album full of positive energy for all of us to enjoy. There's simply no doubt the band delivers it in spades. It is important to note Canshaker Pi is not a one dimensional band. On Naughty, Naughty Violence the band experiments with different sounds and styles. 'No Sack, No Way' has a reggae sauce over it. Arguably this is the most mellow song on the album. It holds a pop feel with its soft vocal melody and harmony choir. A heavily distorted lead guitar takes care of the alternative rock side of the equation.

The noise eruption starting 'Put A Record Out' shows that the band does not need noise to convince. Of course it sounds so fine. The lead melody on the guitar is simply great. 'No Sack, No Way' shows Canshaker Pi can write a great mellow song as well. Without any going against the grain of conventional pop notes involved that most songs of the band hold in abundance. Without losing a pop feel when all is said and done.

Overall my impression is Naughty, Naughty Violence is slightly more conventional as a whole compared to 'Canshaker Pi'. Perhaps the band took just a little more time to think the details through or wants a chance at some more success, which is a legitimate choice. It is not as if I'm listening to One Direction right now. Canshaker Pi may be looking for the balance between its confrontational, non-compromising style and a subtle pop flavour woven into its core fabric. The band seems to be growing up in public with its latest album and I'm fine. "I know it's never ever going to happen again", Willem Smit sings in 'The Indie Academy'. So the next album is totally balanced? For me Naughty, Naughty Violence is fine. A great follow up to a great debut album.