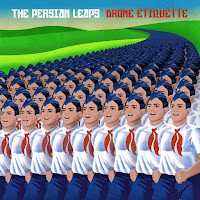 Just over a year ago The Persian Leaps were present on this blog with its mini album 'Smiling Lessons'. Perhaps the review assisted a little in these lessons as the band obviously welcomed the review warmly on its Facebook page. Looking at the picture below though, I'm not so sure... Come 2021 and with Drone Etiquette, The Persian Leaps return to WoNoBlog.

In a way I could copy/paste the review, as most of what it states, works for Drone Etiquette. At the same time it would sell the album tremendously short. What attracts me to this new album and even more so than to the previous one, is the positive energy the songs share with the world. The poppy rock songs, seven of them, including a single mix, take the best of Teenage Fanclub's mid 1990s albums and add a touch of sunshine to them, just like is coming through my window right now, after the dark clouds and off and on downpours that have been going on for over 24 hours. The silver linings make the music of the St.Paul/Minneapolis based bands such a joy to listen to.

Some things have changed in the past year. Drew Forsberg is back to how he started The Persian Leaps over a decade ago: he is The Persian Leaps. (The band name came to Forsberg while daydreaming during a class on Greek archaeology.) Bass player John Hunt is gone a well. This is credited to the lockdown conditions more than anything else, so perhaps Hunt will return on a next recording. This does not make a difference in the songwriting. This was all Forsberg anyway.

As a Dutchman I have always been more U.K. oriented than U.S. The difference comes forward in how I perceive the album and how the bio describes it. The bio mentions 90s college rock as the main influence, where I hear all these U.K. bands from the 90s to mid 00s as main influences. Everything from Teenage Fanclub to The Rifles come by here. Glorious pop-rock songs that invite listening to seriously, allow dancing and singing along to and are great to listen to at a louder volume while cooking. Top of the pop combinations in music, is my two cents.

Living in a lockdown, but of course even more so the reasons that caused the need for successive lockdowns, was extremely negative. Not to speak of the negative consequences Covid-19 has had on (semi-)professional musicians. Over here it sometimes looked as if our government sees the music business as a nice hobby and not as the industry so many are dependent of their livelihoods. I've heard some quite bitter comments from musicians on this. It all has a bright side for the music fans though. It led to music that perhaps would never have existed, as musicians were thrown back to an isolated live as well. And what do musicians do? Create new music. It may well be that Drone Etiquette is a result from the lockdown as well. A welcome present it is.