X: The Godless Void And Other Stories. ...And They Will Know Us By The Trail Of Dead 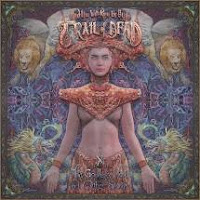 When did I last write on the Texas band with the impossible long name? I can't remember. It may have been in the previous decade, but perhaps even longer. The magazine held a few reviews for certain. It turns out the band was on a long holiday since 2014, so the hiatus in writing becomes understandable. At the same time Trail of Dead is not a band I sorely missed. It sort of disappeared from memory.

The review in 'Oor' did make me prick up my ears though and made me fire up Spotify to give it a listen. The good thing is, nothing has changed, the bad thing is, nothing has changed. During the first listen session I can't make up my mind yet. Of course, the music is larger than life itself. The singer, the band has two, is omnipresent over the music. The few moments of delicacy, mind everything is relative, are the time to breath deep and wait for the next sonic storm to catch up with you. Both elements, if not the combination, make the music of Trail of Dead impressive. This does not necessarily equal good. For this band however impressive usually does though.

X: is another album that just refuses to go by unnoticed. Although I am inclined to write X: is an album that is one huge storm without an end, it isn't. The album has many moments of rest, where the band holds itself in check; before exploding any way. As is the nature of Trail of Dead. I do not know all ten albums. On the ones I do know a sonic tempest of sorts is pulled over the listeners. The mix of melodic metal, some psychedelic hard pop and classic rock, again doesn't fail to impress me. In the use of dynamics a varied and strong album is presented making X: an instant favourite. An album I keep finding myself returning to.

Around since 1994, the Austin formed band has been quiet since 2014. So it isn't so strange that they had slipped off my radar. It is time though to return to my Trail of Dead favourites of the 00s. Just to compare how good X: is in a relative way.

The huge sound of this band can be overwhelming, just like Norwegian band Soup can be in the same musical segment. The sound at times is so full that it is nearly impossible to hear the little details worked into that wall of sound. The build up in 'Through The Sunlit Door' is so pleasant because it is possible to distinguish each little addition to the sound before the band goes full out. And here the voice is mixed over the music instead of into the whole.

For me, after several listening sessions, the verdict is clear. With X: The Godless Void And Other Stories ...And They Will Know Us By The Trail Of Dead returns with an album that totally convinces. Without straining itself in the least the band seems to present its best. Another good album under its arm, it's time to tour.

You can listen to and buy X: The Godless Void And Other Stories here: