Find Me Out. Spanking Charlene 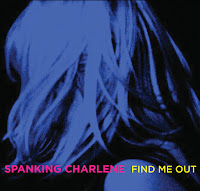 How many bands exist in the world that find their influences in music in the short period in time powerpop ruled the charts with bands like Blondie, The Romantics, Joan Jett and The Knack running vanguard? It must be a lot and they seem all to be on the radar of that brave label called Rum Bar Records.

CBGB's may have closed down some time ago. It seems to me Charlene McPherson and her men have been sniffing around the Bowery neighbourhood trying to locate the last little pieces of inspiration still lurking around that little, dark, ugly hole in the wall behind which doors all things NYC punkrock originated from.

Spanking Charlene have found that inspiration in abundance. On Find Me Out, the band's third album, it finds the right balance between dirty, sleazy rock and a pop element. In other words Mariska Veres meets Joan Jett. Several songs remind me of Shocking Blue, for those knowing more songs than 'Venus', which is not my absolute favourite. That honour goes to 'Send Me A Postcard'. The sound is made tougher, making the U.S. post punk's powerpop shine through in abundance. That makes the jazzy 'Can't Let You Go' all the more surprising. This laidback track comes at exactly the right time on the album, to give it a bit variation and some excellent dirty guitar playing in the solo.

Find Me Out is the band's third album, all produced by Eric "Roscoe" Ambel, who has joined the band as second guitarist. It is also a return for the band after not releasing an album for eight years. A return like a firm statement. Hard rocking but fair. Charlene McPherson's voice may not be extremely solid, but made for this music. She gives a beautiful female touch to the tough music, making it warmer and extremely pleasant to listen to. And what man would not like to imagine she sings for him here: "Whiplash, as you walk past"?

Find Me Out? Yes, I have found you out, as an album that rocks in a great way. Bringing all sorts of nice memories of things past while replacing them with a great new set of powerpop, dirty rocking songs. Let's spank some more.

You can listen and buy Find Me Out here: